HomeEventsComedy on the Cumberland Returns to the Roxy Regional Theatre on June...
Events

Clarksville, TN – Stand up comedy returns to Clarksville, on Tuesday, June 7th at 7:00pm at the Roxy Regional Theatre, as F&M Bank presents “Comedy on the Cumberland”.  The Clarksville Salvation Army will be the beneficiary of the show.  This year, Bonehead Promotions is focusing on The Clarksville Hunger Project, an awareness campaign featuring benefits for the local agencies who fight hunger in our community, because hunger is no laughing matter.

This show features Paul Strickland, Brian Swinford, and  C.J Harlow; and is hosted by local talk show host and comedian,  Hank Bonecutter. Comedy on the Cumberland has featured national touring comedians like Henry Cho, Keith Alberstadt, Rik Roberts, and Karen Mills. With Clarksville Tennessee being so close to Nashville, and it’s booming comedy scene, comedians are anxious to come to Clarksville and perform.  “They’ve heard how popular our event is”, according to Bonecutter, “and want to perform at our venue”.

The June show is being presented with the support of F&M Bank, Wendy’s of Clarksville, Wyatt Johnson, and the Coleman Tractor Company. The Roxy Theatre is the perfect venue for stand up comedy. There will also be a presentation by the Roxy of their production of the John Denver musical, “Almost Heaven”. “Our sponsors are all very involved in our community, and this event is a great way to raise money and awareness for the charities in our community”, said Bonecutter.

The key to Comedy on the Cumberland is that it is a very family friendly event.  Good clean stand up comedy that everyone can enjoy.

Tickets are only $30.00, and will sell out before showtime.  Tickets are available at F&M Bank, the Roxy Theatre downtown, or at the Comedy on the Cumberland web site . “You can’t get a better entertainment value anywhere”, according to Bonecutter.  “Come downtown, have dinner at one of the local restaurants, and then come to the Roxy Theatre for the kind of comedy show that you would only expect to see in the big city”.

Produced by Bonehead Promotions, the Comedy on the Cumberland benefits have raised nearly thirty thousand dollars for charity since it’s inception.

So don’t miss the comedy event of the year! Tuesday, June 7th, 7:00pm at the Roxy Theatre in downtown Clarksville.  Comedy on the Cumberland, using laughter to change our community. 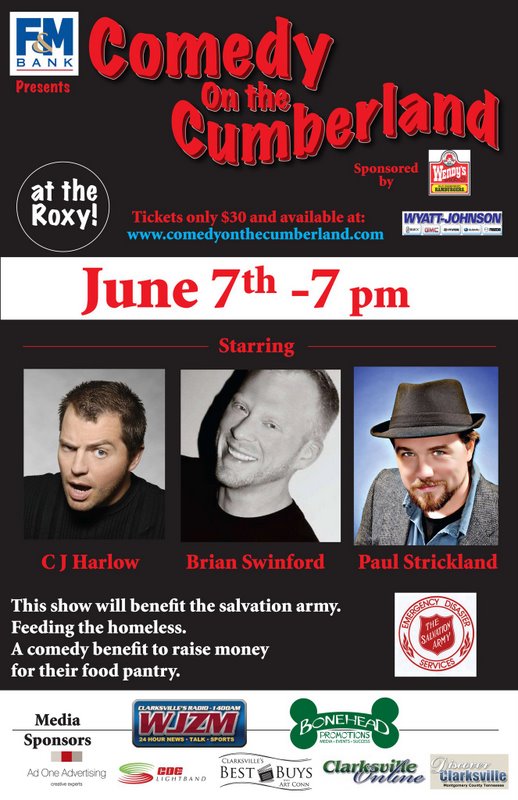 Hank Bonecutterhttp://www.clarksvillesmotorcycle.com/
Hank Bonecutter is a retired broadcaster and media consultant based in Clarksville, Tennessee. His career includes stints at WKDA/WKDF and WKQB Rock 106FM, WLAC-AM in Nashville. He concluded his career as owner/talk show host at WJZM-AM in Clarksville. Currently the President of Bonehead Promotions, he's an advertising consultant and media strategist. An avid motorcyclist, Hank blogs about his travels exclusively at www.clarksvillemotorcycle.com and www.clarksvilleonline.com You can follow Hank on on Facebook at https://www.facebook.com/dodgintheroadkill/, on Twitter at https://twitter.com/?lang=en, and Instagram https://www.instagram.com/dodgetheroadkill/?hl=en
RELATED ARTICLES
Events