Though far from home, Currahees offered a special remembrance during a Memorial Day ceremony to Soldiers who have paid the ultimate sacrifice for their country.

“Today, as in the past, there are problems that must be solved and challenges that must be met,” said U.S. Army Col. Sean M. Jenkins, commander of 4th BCT, 101st Airborne Division, Task Force Currahee.

“That is why we are here today — many of you are on your second or third deployments. We can tackle those challenges with full strength and creativity only because we are free to work them out in our own way. We owe this freedom of choice and action to those men and women in uniform who have served this nation in its interests in time of need. In particular, we are forever indebted to those who have given their lives that we may be free.”

After solemn reverence was paid in remembrance of fallen Soldiers, Currahees spent time building morale during a barbecue.

A feast of hamburgers and hotdogs brought familiarity to the Soldiers.

“The food was delicious,” said U.S. Army Sgt. Colten Nixon, an infantryman with HHC, 4th BCT, 101st Airborne Div., TF Currahee. “It was a nice treat to have something that feels a little like home.”

“It was nice to be able to sit with my friends and eat the delicious food,” said U.S. Army Staff Sgt. Kathryn Barsallo, a retention noncommissioned officer with HHC, 4th BCT, 101st Airborne Div., TF Currahee. “This is what I probably would be doing for Memorial Day if I were back in the states with my kids.” 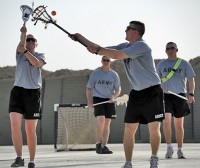 “It was a really fun, great game,” said U.S. Army Sgt. Ashley Leightner, an intelligence analyst with HHC, 4th BCT, 101 Airborne Div., TF Currahee. “There was a great sense of camaraderie. The teams were comprised of a mixture of both officers and enlisted Soldiers; we all played hard and had a blast.”