All three are Nashville law enforcement officers serving together at Bagram Airfield in Afghanistan as part of the 455th Expeditionary Security Forces Squadron. Little did they know an early morning tragedy would strengthen their already tight bond.

“It started out like a normal presence/recon patrol,” Sargent from Livermore, CA, recalled. “We had gone and done these patrols numerous times and nothing had happened.” 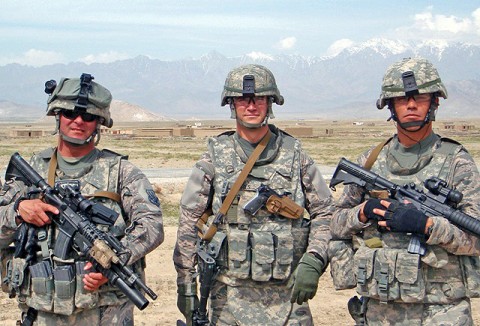 But this day was different.

The team walked through numerous minefields in the past and were comfortable with that; the fields were clearly marked. But on this day, the team responded to a report of an individual digging, a common method for emplacing mines and improvised explosive devices. The field they were in, which bordered the base, was neither marked as a minefield nor indicated as one on a map.

Estes from Pensacola, FL, was the point man with a military working dog detachment behind him. Sargent was four men behind the dog handler.

“We were walking through the field,” Sargent recalled. “And then two men back from me … boom!”

A landmine detonated, taking down an Airman.

“I think we were all confused at that moment as to what had happened,” Sargent said. He said their instinct was to react to indirect fire, but quickly realized that wasn’t what happened. 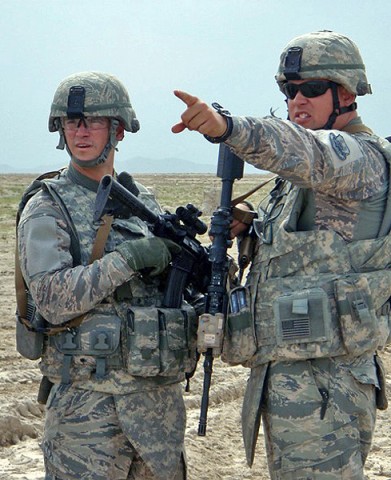 “There was a big poof of smoke and then an eerie silence,” Sargent recalled. “It’s just like you hear about: everything slows down drastically. There was the eerie silence and then came the yelling. I looked back and saw (the Airman). The first thing I noticed was the tattered bone and flesh off his left leg. He was trying to sit up, and his face was ghostly white underneath the black soot.”

The squad leader told everyone to get down and a combat lifesaver certified Airman rushed in to provide urgent battlefield care. But the nightmare was not over.

“In a span of what seemed like five minutes, which was actually only a minute and a half, the military working dog handler (stepped on another landmine),” Sargent said. “It’s a weird feeling calling for casualty evacuation right outside the wall of the base.”

The Airmen lost his left foot as a result of the blast. The mine was emplaced 15 feet from the edge of the field and 10 meters from the base in a ditch.

“I heard a boom behind me and all I could see was a black cloud,” Estes said. “Then I saw a dog come out, and I saw (the handler). He was trying to crawl out of the ditch, with black soot all over his face. He couldn’t crawl. I reached down and told him to give me his hand and pulled him out. I rolled him over inside the ditch, and started looking for a tourniquet.”

Estes put the tourniquet on the Airman’s leg, controlled the bleeding and effectively saved him. He performed a two-man carry to evacuate the injured Airmen from the minefield.

Terrazas from Lake Orion, MI, was inside the base when the incident happened.

“I heard an explosion and called the explosive ordnance team to see if they had just done another controlled detonation,” he remembered. “That’s when I heard (Sargent) come up on the radio and say they had just hit a mine. He was very calm.

“I started responding, and talked to our sniper team to see if they had eyes on the area they were at. Then I heard the second explosion and (Sargent) come back on the radio and said there was a second injury.

“I was thinking about (Estes),” Terrazas said about what went through his head after he got the call. “You start thinking about all the stuff we did, his family, all that. I started getting stretchers together, and at that point didn’t know whether they were taking direct fire, being ambushed, or what.”

Terrazas and a team of five other Airmen went outside the wire to recover their fellow Airmen, walking through the field with the guidance of the snipers.

“We went out and got the canine handler and the weapons and provided rear security until we got everybody back in,” Terrazas said.

“It was a reassuring feeling to see Terrazas … coming out of the gate to help us,” Sargent said.

The team learned later the entire field was heavily mined.

Both Airmen struck by the mines are now recovering at Walter Reed Hospital in Washington, D.C. One Airman, who lost his lower left leg, walked with a walker one week after the incident. In Germany, he got a bedside visit from actress Angelina Jolie, which his fellow Airmen still tease him about. 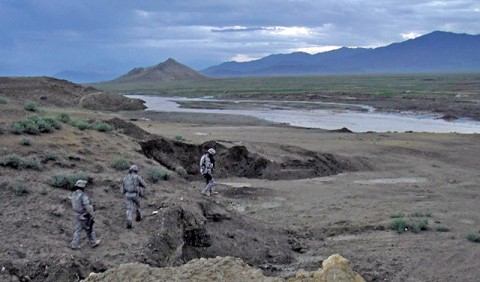 The three said they believe their ages (Estes, is 33, Sargent, 39, and Terrazas, 44), and law enforcement experience, enabled them to remain calm and handle the situation successfully.

“I noticed a big difference in how we responded to the incident,” Sargent said. “It was almost to the point where I almost felt a little callous because I wasn’t as emotional as the other (Airmen) were. I just think that’s just due to our age and experience.”

“Going through the Metro Police academy, as difficult as it was, as much as they beat us down, it actually prepared us for dealing with traumatic experiences like this,” he said. Terrazas said their training at the police academy helped them build a wall between emotion and logic, enabling them to take care of the mission at hand and deal with the emotions later.

“Our primary responsibility is the base,” Terrazas said, explaining the role of the 455th on Bagram Airfield. “If there is an attack, we lock down the base, secure any holes or breaches, engage and kill the enemy as they attempt to infiltrate the base.”

The role of base security means the Airmen must be vigilant, watching where they are walking, knowing where they are, and realizing the people they deal with could be allies or enemies which they said can be a lot like being on patrol back in the United States.

The three, each with about 12 years of military service, have a lot in common besides the minefield tragedy they responded to. All were prior active duty service members, each from different branches. Estes spent nine and a half years on active duty in the Air Force, Terrazas spent eight years in the Marines, including an 18-month deployment. Sargent, meanwhile, spent eight years as an infantry Soldier in the Army, including four years in the historic Old Guard drill and ceremony detachment in Arlington.

“You’ve got three different branches that came together who all work in law enforcement in Davidson County, TN, that ended up in the same Guard unit here in Afghanistan,” Terrazas said.

About three years ago, each joined the 118th Security Forces Squadron in Nashville. The Metro and Davidson County officers would serve on their respective departments as civilians and come together one weekend a month as members of the same squad at their Air National Guard unit.

What makes the group so tight, Terrazas said, is that each knows he has the other’s back, regardless of the situation.

“What we missed most from being prior service is the camaraderie, and we have that amongst the three of us,” Terrazas said. “I can’t get rid of Estes! We’re a band of brothers and we look out for each other.”

“There’s a common bond there, between military and law enforcement,” Sargent added. “Where else do you find a job where people are willing to die for each other?”