Sounds’ Win Streak Ends With 6-5 Loss In Round Rock

Round Rock, TX – The Nashville Sounds had their season-best five-game winning streak snapped with a 6-5 loss to the Round Rock Express on Thursday evening at The Dell Diamond in the opener of a four-game series.

The loss was the PCL-leading 22nd one-run defeat of the year for Nashville (37-43), which participated in its league-high 38th contest decided by a single run.

The Sounds continued their June power surge by belting three home runs in the contest and finished the month with 42 longballs. 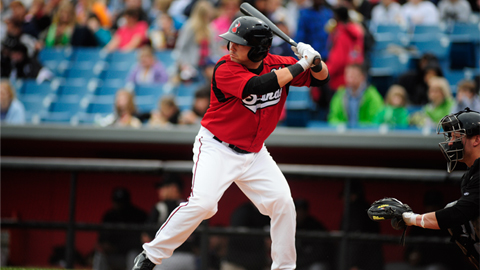 Round Rock jumped in front, 4-1, with a four-run outburst in the second against Nashville starter Chase Wright.  The Express used four consecutive base hits following a one-out walk to ex-Sound Brad Nelson to do their damage.

Joey Butler tied the contest with an RBI double before Julio Borbon (4-for-5) put the home team in front with a two-run single to center. Omar Quintanilla wrapped up the four-spot with a run-scoring single to right.

Nashville pulled back within a run at 4-3 by plating belting solo homers in the fifth and sixth innings.  Brandon Boggs led off the fifth with his sixth roundtripper of the year and Caleb Gindl (3-for-4) swatted his ninth big fly of the season with two outs in the sixth. Both taters came off Feldman.

The Express got those two runs back in the bottom of the sixth against Sounds reliever Zack Segovia to extend their lead to 6-3. Butler led off with a double against Wright and scored one batter later on a Borbon single.  Borbon, who advanced to second on the play due to a Boggs fielding error in left, later scored the inning’s second run in unearned fashion on a Mike Napoli sacrifice fly.

Brett Carroll (2-for-4) pulled Nashville back within a run in the seventh when he crushed his 12th home run of the season, a two-out, two-run shot to left off Round Rock reliever Darren O’Day. Farris (2-for-4) preceded Carroll with a single and also scored on the blast.

Carroll extended the Sounds’ longest active hitting streak to eight games, one shy of his best effort of the year.

Feldman (2-0) earned the win with a quality start for Round Rock, holding the Sounds to three runs on eight hits over six innings.

Tommy Hunter retired the side in order in the top of the ninth, striking out two of his three batters face, to secure the win and nail down his first save of the year.

Wright (5-5) took the loss for the Sounds after giving up four runs on eight hits over 4 1/3 frames of action.

The teams continue the series with another 7:05pm meeting on Friday. All-Star left-hander Sam Narron (4-3, 3.70) will man the bump for the Sounds to take on rehabbing Texas Rangers right-hander Brandon Webb. The 2006 National League Cy Young winner will make his first rehabilitation appearance for Round Rock in the contest.