Bagram Airfield, Afghanistan – Soon after arriving to the 101st Sustainment Brigade this past year, Brigade Command Sgt. Maj. David Thompson gathered all his senior noncommissioned officers into the conference room and shared with them his philosophy on leadership.

One statement resonated among the NCOs during that meeting: “I surround myself with excellence,” he said. “And I expect the same from you.” 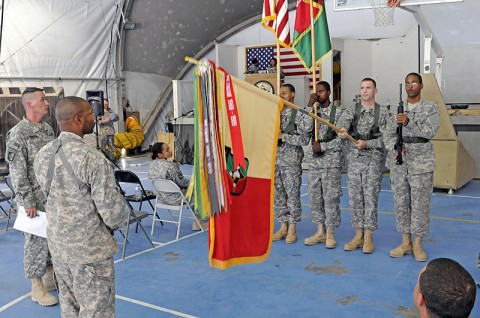 Flash forward several months: the brigade known as the “Lifeliners” is entering its eighth month of its deployment to Afghanistan in support of Operation Enduring Freedom. It’s the brigade’s fifth combat deployment since the Global War on Terrorism began.

The brigade is also preparing to celebrate 55 years of heritage and history July 1st. The Lifeliners will mark the occasion with a birthday and streamer ceremony in Afghanistan at the Morale, Welfare, and Recreation Clamshell. They will also host an Organizational Day for the soldiers as well.

What’s important is what the soldiers take away from the day: a sense of importance of what their unit has meant to the Army and the 101st Airborne Division throughout the years. “It’s a way for us to give back to those Lifeliners who have sacrificed eight months here in theater,” he said.

The brigade is responsible for delivery and ensuring all the supplies and resources needed for coalition forces.

Thompson said the ceremony is meant to pay homage to the history of the Lifeliners and the legacy of everyone who served in Vietnam, Iraq and Afghanistan.

“In each of those conflicts, there is a fallen Lifeliner, and the battle streamers on our colors reflect that,” he said.

“The sad thing is we don’t know the stories of what happened all those years ago. But we’ll still pay tribute and honor to the legacy of everyone who served with this brigade in the past 55 years.”

Thompson said each time a pod of streamers from the different wars is brought up during the ceremony will provide the soldiers insight into the brigade’s role in the conflict. “You’ll hear the music of that era, but more important, you’ll hear tidbits relevant of that time period.”

The brigade will also pay tribute during the closing of the ceremony to the “Gamberi Six” soldiers who were killed this past April in a suicide bombing attack.

“We have it as a Fallen Hero tribute,” Thompson said. “It’s imperative that we tie in and recognize our current loss. The streamers we’re adding on to this campaign represent their story.”

The brigade command sergeant major said he credits Brigade Commander Col. Michael Peterman for helping a sense of excellence in the brigade.

“He has spent the past two years setting the stage for this deployment, looking through the ranks and getting the best officers and noncommissioned officers for this his team, and it has paid dividends,” Thompson said.

“This brigade is highly thought of. We’re always looking ahead to the ‘next step,’ not just the present situation. When we get a mission, we always think of the impact for the next generation once we leave. That is the legacy of this brigade.”

Thompson came to the Sustainment Brigade from the 3rd Brigade Combat Team, known around Fort Campbell as the “Rakkasans.” He said he has an incredible sense of pride in the accomplishments of his current unit.

“It’s overwhelming, the pride and focused everyone on this team is,” he said. “I’m the most proud of [the Lifeliners Combat] patch, because coming to a sustainment brigade and serving a division like the 101st, make me see how we impact all of the soldiers in our area of operation. One is an important as the other. That’s the beauty of a sustainment brigade.”