A basic principle of war is that a combatant will fight most fiercely when protecting his home. Failure to weigh that axiom has depleted many powers over the centuries.

When building a house last year, we positioned it so that it was enveloped by the trees. We believed we were staking our claim and had the registered deed to prove it.

The natives, however, saw things differently. They had been there for generations and we were invading their home.

We were somewhat benevolent as we provided provisions for the natives through the winter and into the spring. The natives began to see our provisions as entitlements as summer came on. Why should they labor when adequate resources were provided?

When efforts were made to regulate the supply and monitor the recipients, things turned ugly. 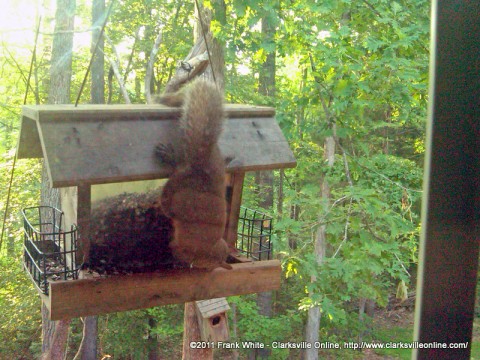 The agile squirrels were more crafty and determined. They found creative ways to take a flying leap on top of the bird feeder. After the second time a weighty squirrel crashed the bird feeder to the ground, it was not immediately replaced.

The interruption to the black oil sunflower seed supply produced a squirrel rebellion. The protesters gathered in the surrounding trees chanting and shaking their tails demanding their entitlement.

When their demonstration did not produce the desired result, the protesters escalated to violence. Using the skills developed by jumping onto the bird feeder, they jumped onto the second floor window ledge. There, as the cats watched unable to attack from the other side of the glass, the marauders proceeded to shred window screens before retreating back to the security of the trees.

I saw it as an act of aggression by ungrateful and non-contributing leaches on the social structure. They saw it differently. They demanded equality with the birds in the distribution of resources.

I’ve made a jingoistic declaration of war on the furry rodents. But, causing them death or bodily injury violates my principles. Even if I engaged in a war of aggression, the little patriots would have the upper hand. Certainly, they would not be deterred as the body count escalated. An endless wave of fresh defenders of the land would come from the surrounding woodlands. Eventually, their will to win would outlast my resolve to bring them to their knees. Alas, I’ve become an occupation force. What a quagmire.

This entry was posted on the Mediaworks Blog on Thursday, June 23rd, 2011 at 5:21 pm and is filed under Adventure, Family, Humor.

The squirrels have agreed to negotiate their demands that I withdraw from the Birnam highlands.  They are willing to negotiate a settlement acknowledging the December 2010 boundaries.  They offer to cease raids on the birds’ sunflower seed allotment as long as I continue to provide an adequate and easily accessible supply of corn at the demarcation line.

A few rebel dissidents still insist that I withdraw from the highlands and leave a uninterrupted supply of corn and sunflower seed as restitution.  They are protesting what they claim is my invasion of their territory.