Motorcyclist Extremely Critical After a Crash with a Car

She did not see and crossed into the path of an oncoming 2009 Kawasaki motorcycle traveling east on Tiny Town Road, ridden by Joshua Higgs, 21, of Clarksville. 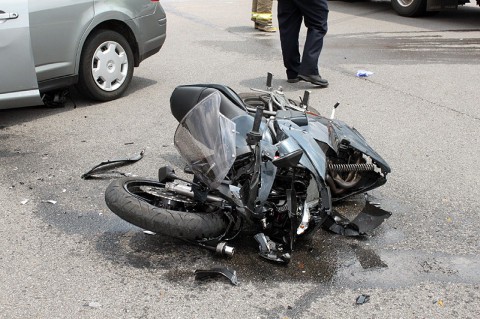 A 2008 Nissan Versa pulled out in front of a 2009 Kawasaki motorcycle causing the motorcycle to collide with the car. (Photo by CPD Officer Derrick Cronk)

Higgs unsuccessfully attempted to avoid a collision and hit the Nissan near the driver’s side front left wheel area. Higgs was unseated from the motorcycle and landed on the roadway.

Higgs sustained multiple injuries to the head and body. He was Lifeflighted to Vanderbilt and is in extremely critical condition. Higgs was wearing a helmet at the time of collision. McDonald was checked at the scene and was not transported.  She was wearing a seatbelt.

Kimberly McDonald was cited for Failure to Yield.