Oklahoma City, OK – First baseman Erick Almonte crushed a two-run double in the top of the 10th inning to power the Nashville Sounds to a come-from-behind 11-9 victory over the Oklahoma City RedHawks in the opener of a four-game set on Tuesday night.

Scoring six runs in the final three innings, Nashville (51-53) moved to 3-9 in extra-inning play while picking up its 11th last-at win of the season (second on the road). It was also the Sounds’ eighth come-from-behind win while trailing in the seventh inning or later. 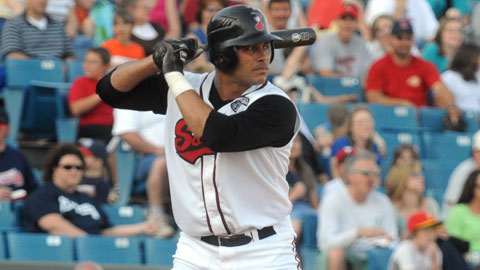 Coming into the contest tied for 2nd in the PCL with 32 hits in July, outfielder Caleb Gindl went 3-for-5 with two runs scored. Second baseman Taylor Green went 2-for-5 with a double for his sixth multiple-hit effort in his last eight games.

Shortstop Eric Farris jacked a three-run homer while driving in a season-high four runs. Center fielder Logan Schafer singled in the 10th to extend his hitting streak to five games.

Farris’ three run home in the top of the second inning gave the Sounds an early 3-0 advantage. After Mat Gamel singled and Mike Rivera walked, Farris belted his sixth homer over the left field wall.

Oklahoma bounced back to bat around and score six runs in the bottom of the second to chase Sounds starter Sam Narron from the game. The first two runs came from a Koby Clemens two-run homer to center, his 14th of the season. Narron would later issue four consecutive two-out walks, followed by a two-run single from Robinson Cancel and RBI base knock from Brian Bogusevic. Reliever Daniel Meadows would then enter the contest and fan Drew Locke to end the rally.

Nashville chipped away and scored two runs in the fourth for a 6-5 deficit. Gamel doubled home Almonte for the club’s first run and later scored the other run on a Farris RBI single, which removed RedHawks starter Brad Hennessey from the game.

Oklahoma City would score three more runs to extend the lead to 9-5 in the fifth. Meadows began the frame by recording one out and walking two batters before begin replaced by Daniel Herrera. Wladimir Sutil singled to left to load the bases, which was then followed by two walks from Herrera that scored two runs. The scoring concluded as Anderson Hernandez hit an RBI groundout to shortstop.

Rivera jacked his sixth homer to center to lead off the top of the eighth. Nashville plated another run to come within two at 9-7 on two defensive miscues by Oklahoma City. As Farris hit a grounder to third, Oswaldo Navarro overthrew the second baseman to start the double play, which moved Gindl to third. Farris then stole second base during the ensuing at-bat, but no Oklahoma City player covered the bag as Cancel’s throw hit Farris’ leg. Gindl would come home easily and was credited with a stolen base in the double steal.

Nashville knotted the contest at 9-9 with two runs in the top of the ninth, beginning with a leadoff double to the right field corner by Green. After Oklahoma’s sixth different pitcher, Jeff Fulchino, entered to close the game with a two-run lead, the Sounds quickly loaded the bases with no outs on an Almonte walk and Gamel infield single. Fulchino would then issue a bases-loaded walk to Rivera and an RBI groundout to Gindl for his first blown save of the season.

Almonte’s two-run two-bagger gave the Sounds their first lead of the game in the 10th. Ross Wolf (2-3) struck out the first batter of the frame, and then gave up a single to Schafer, double to Brown, and double to Almonte.

Six Sounds pitchers issued a season-high 12 walks, including three with the bases loaded.

Narron had his worst start of the season. The left-hander allowed six runs on four hits and four walks in a season-low 1 2/3 innings pitched. Meadows surrendered two runs on two hits and three walks in 2 2/3 innings, stranding two inherited runners.

Herrera gave up a run on two hits and a walk in 2 2/3 frames while allowing both of his inherited runners to score. Zack Segovia worked a scoreless inning. Jim Henderson (3-1) finished the game with two scoreless innings for the win.

The run allowed tonight for Herrera snapped a streak of 11 2/3 consecutive scoreless frames over his last eight outings, the longest scoreless stretch by a Sounds reliever in 2011.

Hennessey gave up five runs on seven hits in 3 1/3 innings for a no-decision.

The Sounds and RedHawks continue their series at 7:05pm CT on Wednesday evening at RedHawks Field. Right-hander Amaury Rivas (7-9, 4.66) takes the mound for Nashville against Oklahoma City right-hander Lucas Harrell (1-0, 1.50).

Arguello pitched to 1 batter in the 9th.