The Lady Govs have little to dwell on a 3-1 loss to Western Kentucky, Friday. Not only was it the season’s first loss, they posted a season-low seven shots in the game. Sophomore Joceline Quiceno scored the only goal, in the 40th minute, on a service by sophomore Emily Kink. 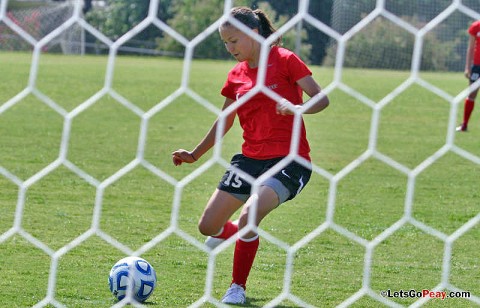 Austin Peay’s biggest challenge in the game, was getting the forwards involved and winning 50/50 balls in the midfield. Sunday’s game will be an opportunity for head coach Kelley Guth’s team to regain its early form and make corrections from Friday’s loss.

“We had some things exposed against Western Kentucky,” Guth said. “Our focus now is on fixing those issues and coming out strong against Belmont. They’re a talented team as well.

Belmont is looking for redemption after blowing a two-gaol lead to fall 3-2, in overtime, against Alabama-Birmingham, Friday. The Bruins led 2-1 at the half, but UAB was steady in scoring one in the first half, once in the second and netting the gamewinner in the 99th minute.

The Bruins are a balanced team, with six players each having one goal to their credit. Nicole Berner has started all four games in net, allowing only six goals.