Bagram Airfield, Afghanistan – When Staff Sgt. Michael Simon enlisted in the Army in late 1997, he said he was following a long line of family members who had served their country. What he wasn’t counting on, however, was actually fighting in a war himself.

“That was the last thing on my mind,” the senior supply sergeant for the 101st Sustainment Brigade said. “They had all fought in a war, but I had no idea when I joined that I would follow in their footsteps and become a combat veteran myself.”

Simon is identified as part of the “Be All You Can Be” generation of soldiers who joined the military prior to September 11th, 2001, for a variety of reasons, ranging from college money to job security. They have witnessed the Army transform from its peacetime Cold War posture to its present one consisting of constant training and multiple deployments to a combat theater. 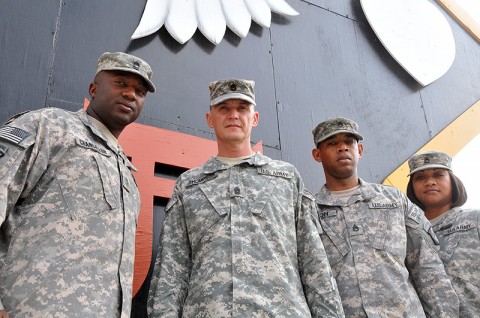 Master Sgt. Lamar Chancellor, Command Sgt. Maj. David Thompson, Staff Sgt. Michael Simon and Sgt. 1st Class Fiona Bunn of the 101st Sustainment Brigade pose underneath the brigade’s emblem at their headquarters. These non-commissioned officers were part of the “Be All You Can Be” generation of soldiers on active duty during the September 11th, 2001 attacks and have witnessed the Army’s transformation from the Cold War to the Global War on Terrorism. (Photo by Sgt. 1st Class Peter Mayes)

Sunday marks the 10th anniversary of the attacks on America that began when the two passenger planes crashed into the World Trade Center towers in New York and a third crashed into the Pentagon in Washington.

A fourth plane, United Flight 93, crashed in a field near Shanksville, PA, after passengers onboard the plane fought the hijackers.

The “Lifeliners” brigade has played an integral role during the Global War on Terrorism, having deployed in support of Operations Iraqi and Enduring Freedom many times during the past decade.

Many of its senior leaders are part of the “Be All You Can Be” generation – those soldiers who joined the Army during the time of the slogan made famous by the Army recruiting campaign of the 1970s and 1980s – and are nearing retirement from military service.

The remaining members of that particular generation who stay in will be tasked with helping the post-9/11 generation transition back to a peacetime force.

Following the success of Operation Desert Storm in the early 1990s, American military forces still maintained its “Cold War” mentality, according to brigade soldiers. The battle between the U.S. and Iraq for the liberation of Kuwait was largely viewed as a one-off event, according to Master Sgt. Lamar Chancellor, supply non-commissioned officer in charge, 101st Sus. Bde.

“With Desert Storm, it was something that lasted like 30 days, if that long,” he said. “It was like, ‘we’re in and we’re out,’ and went back to doing daily business. It didn’t affect the U.S. as much as 9/11 did. September 11th hit home. It affected everybody wearing the uniform and those not wearing it.”

“We bonded together as a nation, but we were scared. You were used to seeing this on TV, in Iraq, Libya, places like that. But when it hit home, it was something different. At that time, we were not prepared for it,” he said.

Command Sgt. Maj. David Thompson, brigade command sergeant major, was assigned to the 7th Corps Support Group in Bamberg, Germany. He said, at the time, he was more focused on the field exercise training in Poland he was preparing for after hearing news about the first plane. When the second and third planes crashed, the reality hit him.

“I had this weird feeling of, ‘dear God, how could this happen to America?’” he said. “The moment the second plane hit, we all went into react mode, and knew at that time even before the media started announcing terrorists that it was too coincidental. Within an hour, we set up a battle desk in our conference room.”

“At that moment, we all knew that our Army had just changed,” Thompson said. “During the entire seven days of that training … we were distracted by the events back home and the unknown of what was happening.”

Soldiers from the pre-9/11 era noted the differences between Army life following the attacks. “Before, we were trained to fight a uniformed, known enemy and a conventional war,” Simon said. “Today’s soldiers who’ve come in after us are not just fighting a uniformed enemy or conventional war, they’re also fighting an idea. And it’s hard to defeat an idea.”

Thompson said the Army’s former “Cold War” doctrine provided soldiers with a “one size fits all” mentality of training, whereas OEF and OIF is much more complex.

“There are Training and Tactical Procedures based on what tribe you’re dealing with or whose village you’re driving through,” he said. “There’s a different TTP for every area. Doctrine can’t keep up with the changes. It’s inherently learned and based on the intelligence we’ve received over the years.”

Chancellor said the event had other impacts on the Army, noting recruiting new soldiers became tougher.

“People did not want to go to war,” he said. “I was on recruiting duty during that time, so it started right there. The Army missed its mission for the next two years. There was talk of bringing the draft back … Parents did not want their children going off to war.”

Soldier training was also affected. Both Chancellor and Mitchell said the Army had to revisit and change its training strategy to make it more relevant in preparing new soldiers and veterans for the rigors of Afghanistan and Iraq.

“All of a sudden, you started seeing how [the Army] was improving basic training,” Mitchell said. “When we came out of basic training, the least thing on our mind was going to war. These soldiers going in now and coming out of Initial Entry and Advanced Individual Training know they are going into combat, so that focus became much more intense.”

Mitchell said the first soldiers on the ground in Afghanistan and Iraq sent back reports of things they encountered while deployed, which was crucial in helping shape future Army doctrine.

“That’s why you begin seeing our soldiers training on things like improvised explosive devices,” he said. “The information they sent back allowed us to learn what we needed to train on for those theaters.”

The veterans said they all agreed that the biggest change about the war was the impact it had on the families, as the constant deployment took its toll on military households. The average Army staff sergeant and sergeant first class with only 10 years experience went through the cycle of train, deploy, go to another duty station – and starting the same process all over again, they said.

“Being away from home, the stress it caused because you were away so long and so often, has definitely affected them,” Thompson said.

The group said it will be up to the remaining veterans of the pre-9/11 generation to help today’s soldiers readjust and relearn garrison environment. Chancellor said going back to a garrison atmosphere will give this new generation an opportunity to stabilize for a while, but it will also present new challenges.

“These soldiers came in at a high-tempo moment. The only thing they know is training, training, go to war,” he said. “People who are used to a high op-tempo are eventually going to be sitting at home scratching their heads wondering what to do. Pretty much everybody’s going to have to relearn garrison operations, from the commanders on down.”

Mitchell said it will be very important for the Army to retain the pre-9/11 veterans who have time left in their enlistment.

“They’re going to be counted on to help bring that [garrison tempo] back to today’s soldiers,” he said.