Greenbelt, MD – Every three hours, NASA’s Fermi Gamma-ray Space Telescope scans the entire sky and deepens its portrait of the high-energy universe. Every year, the satellite’s scientists reanalyze all of the data it has collected, exploiting updated analysis methods to tease out new sources.

These relatively steady sources are in addition to the numerous transient events Fermi detects, such as gamma-ray bursts in the distant universe and flares from the sun.

Earlier this year, the Fermi team released its second catalog of sources detected by the satellite’s Large Area Telescope (LAT), producing an inventory of 1,873 objects shining with the highest-energy form of light. “More than half of these sources are active galaxies, whose massive black holes are responsible for the gamma-ray emissions that the LAT detects,” said Gino Tosti, an astrophysicist at the University of Perugia in Italy and currently a visiting scientist at SLAC National Accelerator Laboratory in Menlo Park, CA.

One of the scientists who led the new compilation, Tosti today presented a paper on the catalog at a meeting of the American Astronomical Society’s High Energy Astrophysics Division in Newport, RI “What is perhaps the most intriguing aspect of our new catalog is the large number of sources not associated with objects detected at any other wavelength,” he noted.

Indeed, if the Fermi catalog were a recipe, the two major ingredients would be active galaxies and pure mystery. To them, add in a pinch of pulsars, a dollop of supernova remnants, and a dash of other celestial objects, such as globular star clusters and galaxies like our own Milky Way.

Astronomers delight in the possibility of finding new types of gamma-ray-emitting objects within the “unassociated sources” that constitute roughly a third of the catalog. But Fermi’s LAT is revealing gamma-rays from an increasing — and sometimes, surprising — variety of astronomical objects. To highlight the range of LAT discoveries, the Fermi team created the following “top ten” list of five sources within the Milky Way and five beyond our galaxy.

The top five sources within our galaxy are:

The famous Crab Nebula, located in the constellation Taurus, is the wreckage of an exploded star whose light reached Earth in 1054. Located 6,500 light-years away, the Crab is one of the most studied objects in the sky. At the heart of an expanding gas cloud lies what’s left of the original star’s core, a superdense neutron star (also called a pulsar) that spins 30 times a second. Until recently, all of the Crab’s high-energy emissions were thought to be the result of physical processes near the pulsar that tapped into this rapid spin.

For decades, most astronomers regarded the Crab Nebula as the steadiest beacon at X-ray energies. But data from several orbiting instruments — including Fermi’s Gamma-ray Burst Monitor — now show unexpected variations. Astronomers have shown that since 2008, the nebula has faded by 7 percent at high energies, a reduction likely tied to the environment around its central neutron star.

Since 2007, Fermi and the Italian Space Agency’s AGILE satellite have detected several short-lived gamma-ray flares at energies hundreds of times higher than the nebula’s observed X-ray variations. In April, the satellites detected two of the most powerful yet recorded.

To account for these “superflares,” scientists say that electrons near the pulsar must be accelerated to energies a thousand trillion (1015) times greater than that of visible light — and far beyond what can be achieved by the Large Hadron Collider near Geneva, Switzerland, now the most powerful particle accelerator on Earth. 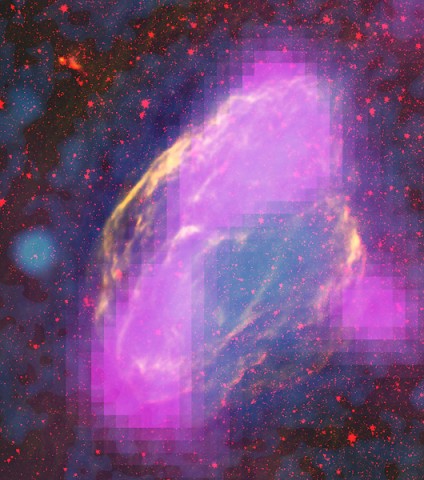 Another interesting supernova remnant detected by Fermi’s LAT is W44. Thought to be about 20,000 years old — middle-age for a supernova remnant — W44 is located about 9,800 light-years away in the constellation Aquila. The LAT not only detects this remnant, it actually reveals GeV gamma rays coming from places where the remnant’s expanding shock wave is known to be interacting with cold, dense gas clouds.

Such observations are important in solving a long-standing problem in astrophysics: the origin of cosmic rays. Cosmic rays are particles — mainly protons — that move through space at nearly the speed of light. Magnetic fields deflect the particles as they race across the galaxy, and this scrambles their paths and masks their origins. Scientists can’t say for sure where the highest-energy cosmic rays come from, but they regard supernova remnants as a best bet.

In 1949, the Fermi telescope’s namesake, physicist Enrico Fermi, suggested that the highest-energy cosmic rays were accelerated in the magnetic fields of gas clouds. In the decades that followed, astronomers showed that the magnetic fields in the expanding shock wave of a supernova remnant is just about the best location for this process to work.

So far, LAT observations of W44 and several other remnants strongly suggest that the gamma-ray emission arises from accelerated protons as they collide with gas atoms.

V407 Cygni is a so-called symbiotic binary system, one that contains a compact white dwarf and a red giant star that has swollen to about 500 times the size of the sun. Lying about 9,000 light-years away in the constellation Cygnus, the system occasionally flares up when gas from the red giant accumulates on the dwarf’s surface and eventually explodes. The event is sometimes called a nova (after a Latin term meaning “new star”).

When the system’s most recent eruption occurred in March 2010, Fermi’s LAT defied expectations and detected the nova as a brilliant source. Scientists simply didn’t expect that this type of outburst had the power to produce high-energy gamma rays.

Pulsar PSR J0101-6422. Pulsars — rapidly rotating neutron stars — constitute about six percent of the new catalog. In some cases the LAT can detect gamma-ray pulses directly, but in many cases pulses were first found at radio wavelengths based on suspicions that a faint LAT source might be a pulsar. PSR J0101-6422 is located in the southern constellation of Tucana, its quirky name reflecting its position in the sky.

“This pulsar turns out to be a great example of the cooperation between the Fermi team and radio astronomers — scientists working in widely separated parts of the electromagnetic spectrum,” said David Thompson at NASA’s Goddard Space Flight Center in Greenbelt, MD, who co-led the catalog team.

The Fermi team originally took notice of the object as a fairly bright but unidentified gamma-ray source in an earlier LAT catalog. Because the distribution of gamma-ray energies in the source resembled what is normally seen in pulsars, radio astronomers in Australia took a look at it using their Parkes radio telescope.

Pulsars are neutron stars, compact objects packing more mass than the sun’s into a sphere roughly the size of Washington, D.C. Lighthouse-like beams of radiation powered by the pulsar’s rapid rotation and strong magnetic field sweep across the sky with every spin, and astronomers can detect these beams if they happen to sweep toward Earth.

The Parkes study found radio signals from a pulsar rotating at nearly 400 times a second — comparable to the spin of a kitchen blender — at the same position as the unknown Fermi source. With this information, the LAT team was able to discover that PSR J0101-6422 also blinks in gamma rays at the same incredible rate.

Fermi scientists don’t know what to make of this source, located in the constellation Camelopardalis. It resides near the populous midplane of our galaxy, which increases the chance that it’s actually an object in the Milky Way. While its gamma-ray spectrum resembles that of a pulsar, pulsations have not been detected and it isn’t associated with a known object at other wavelengths.

The top five sources beyond our galaxy are 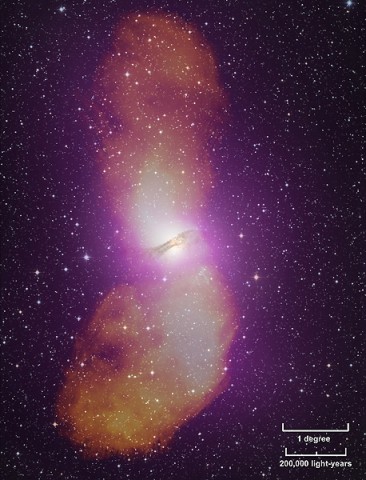 The giant elliptical galaxy NGC 5128 is located 12 million light-years away in the southern constellation Centaurus. One of the closest active galaxies, it hosts the bright radio source designated Cen A. Much of the radio emission arises from million-light-year-wide lobes of gas hurled out by the supermassive black hole at the galaxy’s center.

Fermi’s LAT detects high-energy gamma rays from an extended region around the galaxy that corresponds to the radio-emitting lobes. The radio emission comes from fast-moving particles. When a lower-energy photon collides with one of these particles, the photon receives a kick that boosts its energy into the gamma-ray regime. It’s a process that sounds more like billiards than astrophysics, but Fermi’s LAT shows that it’s happening in Cen A.

At a distance of 2.5 million light-years, the Andromeda Galaxy is the nearest spiral galaxy, one of similar size and structure as our own Milky Way. Easily visible to the naked eye in a dark sky, it’s also a favorite target of sky gazers.

The LAT team expected to detect M31 because it’s so similar to our own galaxy, where a bright band of diffuse emission creates the most prominent feature in the gamma-ray sky. These gamma rays are mostly produced when high-energy cosmic rays smash into the gas between the stars.

“It took two years of LAT observations to detect M31,” said Jürgen Knödlseder at the Research Institute for Astrophysics and Planetology in Toulouse, France. Currently a visiting scientist at the SLAC National Accelerator Laboratory, he worked on the M31 study. “We concluded that the Andromeda Galaxy has fewer cosmic rays than our own Milky Way, probably because M31 forms stars — including those that die as supernovae, which help produce cosmic rays — more slowly than our galaxy.”

What works for the Andromeda Galaxy works even better for M82, a so-called starburst galaxy that is also a favorite of amateur astronomers. M82 is located 12 million light-years away in the constellation Ursa Major.

M82’s central region forms young stars at a rate some 10 times higher than the Milky Way does, activity that also guarantees a high rate of supernovae as the most short-lived stars come to explosive ends. Eventually, M82’s superpowered star formation will subside as the gas needed to make new stars is consumed, but that may be tens of millions of years in the future. For now, it’s a bright source of gamma rays for Fermi.

At the core of an active galaxy is a massive black hole that drives jets of particles moving near the speed of light. Astronomers call the galaxy a blazar when one of these jets is pointed our way — the best view for seeing dramatic flares as conditions change within the jet.

PKS 0537-286 is a variable blazar in the constellation Leo and the second most distant LAT object. Astronomers have determined that the galaxy lies at a redshift of 3.1, more than 11.7 billion light-years away. (Expressed more precisely, the blazar’s gamma-ray photons have been traveling for at least 11.7 billion years before being detected by Fermi’s LAT).

The blazar is the farthest active galaxy in the Fermi catalog to show variability. Astronomers are witnessing changes in the jet powered by this galaxy’s supermassive black hole that occurred when the universe was just 2 billion years old, or 15 percent of its current age.

The last item is another mystery object, one located in the constellation Virgo and high above our galaxy’s midplane. It remains faint even after two years of LAT observations.

If this were a pulsar, it would show a fast cutoff at higher energies. Many blazars exhibit much more gradual cutoffs. But 2FGL J1305.0+1152 shows no evidence of a spectral break at all, leaving its nature — for the time being, anyway — a true mystery.