Clarksville, TN – During the last week of September every year, hundreds of libraries and bookstores around the country draw attention to the problem of censorship by mounting displays of challenged books and hosting a variety of events. The 2011 celebration of Banned Books Week will be held from September 24 through October 1. Banned Books Week is the only national celebration of the freedom to read.

It was launched in 1982 in response to a sudden surge in the number of challenges to books in schools, bookstores and libraries. More than 11,000 books have been challenged since 1982.

There are hundreds of challenges to books in schools and libraries in the United States every year. According to the American Library Association (ALA), there were at least 348 in 2010; the ALA estimates that 70 to 80 percent are never reported.

To support an expanded Banned Books Week, the sponsors have launched a redesigned website, www.bannedbooksweek.org. In addition to providing information about the virtual read-out, it includes an interactive map that shows the location of book challenges in recent years as well as a listing of featured events and a state-by-state listing of libraries, bookstores and other groups that are participating in Banned Books Week.

To provide additional organizational support for Banned Books Week, the current sponsors–the ALA, ABFFE, the American Society of Journalists and Authors (ASJA), the Association of American Publishers (AAP), and the National Association of College Stores (NACS)—recruited several new sponsors this year: NCAC, the Comic Book Legal Defense Fund (CBLDF), the National Council of Teachers of English (NCTE) and PEN American Center (PEN). Project Censored has joined the Center for the Book in the Library of Congress as an endorser of Banned Books Week.

Publishers have increased their support as well. A number of AAP member publishers, including Hachette, Penguin, Random House, Scholastic, HarperCollins and Simon & Schuster are providing guidance for the observance through an AAP Banned Books Week Publisher Task Force.

Readers from across the United States and around the world are demonstrating their support for free speech by participating in a virtual read-out of banned and challenged books that will culminate during the 30th annual Banned Books Week (Sept. 24-Oct. 1), the only national celebration of the freedom to read. Individuals, libraries and bookstores are uploading videos to a special channel on YouTube, submitting either a reading of up to two minutes or a description of a local book challenge of up to three minutes.

You can join the Virtual Read-out!

Everyone is invited to create a video of themselves reading from their favorite banned or challenged book and upload it to a special Banned Books Week channel. Videos of challenged authors and other celebrities will be posted on both YouTube and our Videos page in coming days. More information about the read-out is available here.

As part of Banned Books Week there is an eBay auction ongoing featuring more 70 pieces by leading artists in the children’s book industry, including Peter Brown, Susan Jeffers, Wendell Minor, Adam Rex and Paul O. Zelinsky. Proceeds from the auction will help support efforts to defend the First Amendment rights of young readers, including the Kids Right to Read Project, which is co-sponsored by the American Booksellers Foundation for Free Expression (ABFFE) and the National Coalition Against Censorship (NCAC). Items can be located on ABFFE’s eBay page. 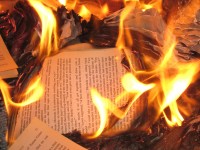 The books featured during Banned Books Week have been targets of attempted bannings. Fortunately, while some books were banned or restricted, in a majority of cases the books were not banned, all thanks to the efforts of librarians, teachers, booksellers, and members of the community to retain the books in the library collections. Imagine how many more books might be challenged—and possibly banned or restricted—if librarians, teachers, and booksellers across the country did not use Banned Books Week each year to teach the importance of our First Amendment rights and the power of literature, and to draw attention to the danger that exists when restraints are imposed on the availability of information in a free society.