Hopkinsville, KY – With junior Holly Batey shooting her first career under-par round as a Lady Gov, Austin Peay State University’s golf team sits in fourth place after the first day of the F&M Bank APSU Intercollegiate, being held at The Links of Novadell in Hopkinsville.

Batey shot a one-under 71—the Lady Govs first under-par round of 2011-12—on the 6,109-yard course. Not only was it her best round as a Lady Govs but it left Batey tied with Eastern Kentucky’s Lisanne Schmidt for first place.

As a whole, the Lady Govs came in with a 12-over 300, APSU’s best round ever in the tourney and tying for the program low round (Lady Govs shot a 300 in the 2006 Troy Invitational).

Meanwhile, Murray State leads the tourney after shooting a 293—an F&M Banks APSU Intercollegiate best (298 by the Lady Racers a year ago was the previous best), followed by Eastern Kentucky (296) and Jacksonville State (299). 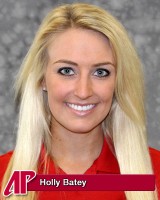 “Overall I thought we played pretty well,” APSU coach Sara Robson said. “We played pretty much like we qualified out here, with a shot here and a shot there.

“Tomorrow we have to go out there and see what we can do about fewer putts—we had too many three putts today.”

In leading the Lady Govs, Batey, the Montgomery Central graduate, played the front nine even par and then mixed three birdies, with four pars and two bogeys on the back side. The 71 ties for the fifth best round in Lady Govs’ history. 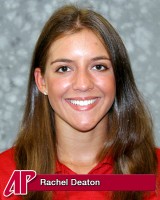 “I am really proud of Holly,” Robson said. “She had a great round—her first time to break par. She played with a lot of confidence out there and that should give her even more confidence for tomorrow.

“Rachel also had a solid round. I think all the girls played pretty well.”

The tourney—APSU women’s golf only home event this season—will conclude Tuesday with an 8:30am shotgun start.