Austin Peay (7-17, 5-8 OVC), less than 24 hours removed from a five-set loss at SIU Edwardsville, got off to a slow start against Eastern Illinois (8-16, 5-8 OVC). The Panthers scored six of the match’s first eight points, including kills by Emily Franklin and Alison Berens. 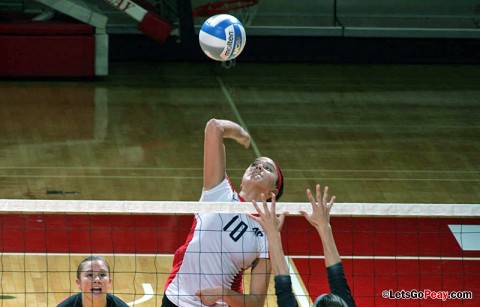 But after reaching 23-20 Austin Peay’s offense stalled and allowed Eastern Illinois to tie the set three times, including 25-25. The Lady Govs finally got back on track with senior Ilyanna Hernandez posting a kill to give APSU its third set point and then going back to serve an ace to end the set.

That set-saving effort was the end of any drama in the match’s remainder as Austin Peay did not trail in the second set and only for a point in the third set. In the second set, Austin Peay broke out to a six-point, 9-3 lead and did not look back.

In the third, the Lady Govs led 9-4 but later surrendered four straight points to take a 14-13 lead. But Austin Peay tied the set on the next serve – the first of six straight points that gave APSU a 19-14 lead it would not relinquish.

Austin Peay, which moved into a three-team tie for seventh place in the OVC standings, begins its final homestand – a three-match stretch – with a 6:00pm, Tuesday contest against league-leading Morehead State.