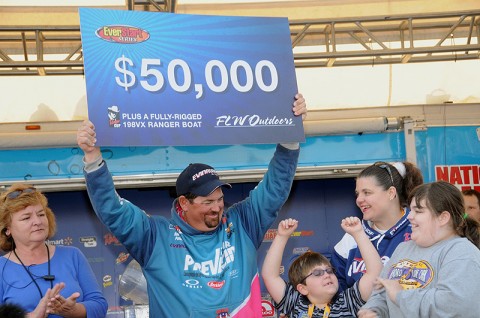 Dan Morehead celebrates his victory in the EverStart Series Championship with his family. (Photo by Rob Newell)

“I’ve been waiting since 10:30 to weigh my fish,” said an overzealous Prevacid pro Dan Morehead who was looking for his first championship title. “I am tickled to death with what I did. A lot of people thought this tournament would be won down south, but Kentucky Lake is Kentucky Lake and I had to go north to my home waters.

“I caught most of my fish with the Alabama rig,” Morehead continued. “Let me tell you, nothing triggers suspended fish quite like this rig. I have never felt the bass strike the way they do as on an Alabama rig. I had three rods on my deck. Two had the Alabama rig. One had four, 4 1/2 inch Berkley Hollow Belly Swimbaits surrounding a 5 1/2 inch swimbait. On the other I had five, 5 1/2 inch Berkley swimbaits and would switch to the bigger bait rig after I had caught my limit and wanted to go for the bigger bass. On the first day when the weather was so nasty I caught two of my better fish using a Zara Spook. But for the rest of the tournament it was all Alabama rig. 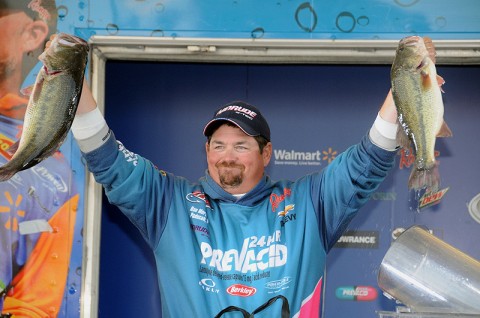 Dan Morehead shows off his winning fish caught on an Alabama rig. (Photo by Rob Newell)

“This is just awesome to be able to win in front of all my friends and family,” Morehead added.

Troy Anderson of Galesville, WI, won the Co-angler Division and a Ranger boat with an Evinrude or Mercury outboard motor plus $5,000 with a three-day total of 15 bass weighing 42 pounds, 3 ounces. 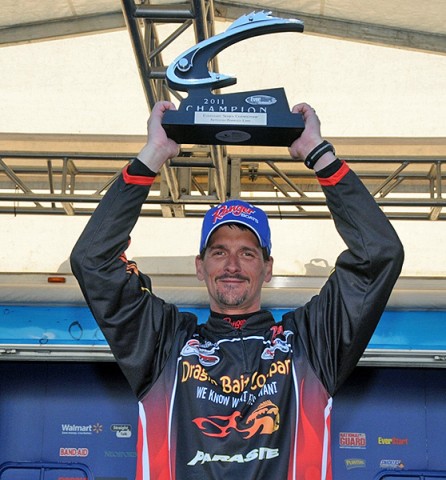 Troy Anderson of Galesville, WI, wins the Co-angler Division of the EverStart Series Championship with a three-day total of 42-3. (Photo by Rob Newell)

Rounding out the top 10 co-anglers were:

The EverStart Series consists of five divisions – Central, Northern, Southeast, Texas and Western. Each division consists of four qualifying events. The top 40 pros and co-anglers from each respective division qualified for this championship event and were fishing this week on Kentucky Lake. 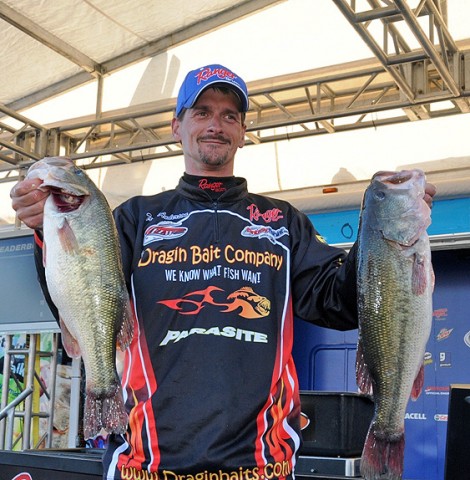 Coverage of the EverStart Series Championship on Kentucky Lake will be broadcast in high-definition (HD) on VERSUS. “FLW Outdoors” will air December 18th from 1:00pm to 2:00pm ET. “FLW Outdoors,” hosted by Jason Harper, is broadcast to more than 500 million households worldwide.

For complete details and updated information visit FLWOutdoors.com. For regular updates, photos, tournament news and more, follow the EverStart Series on Facebook at Facebook.com/FLWEverStartSeries and on Twitter at Twitter.com/FLWOutdoors.

FLW Outdoors is the best in fishing, on and off the water. Anglers worldwide can compete for millions over the course of 191 tournaments in 2011. FLW Outdoors has taken fishing mainstream with the world’s richest fantasy sports game, FLW Fantasy Fishing presented by Straight Talk, where competitors can play for free as well as sign up for Player’s Advantage to gain an edge. For more information about FLW Outdoors and FLW Fantasy Fishing, visit FLWOutdoors.com or FantasyFishing.com.