A Star with Spiral Arms

Greenbelt, MD – For more than four hundred years, astronomers have used telescopes to study the great variety of stars in our galaxy. Millions of distant suns have been catalogued. There are dwarf stars, giant stars, dead stars, exploding stars, binary stars; by now, you might suppose that every kind of star in the Milky Way had been seen.

That’s why a recent discovery is so surprising. Researchers using the Subaru telescope in Hawaii have found a star with spiral arms. 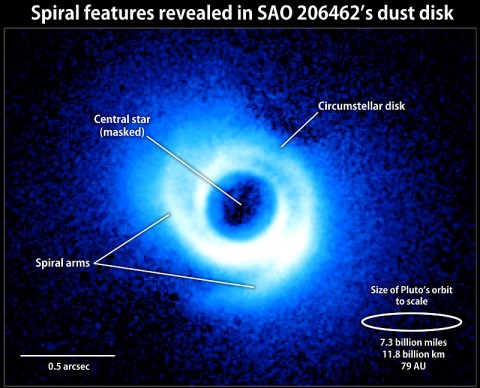 Two spiral arms emerge from the gas-rich disk around SAO 206462, a young star in the constellation Lupus. This image, acquired by the Subaru Telescope and its HiCIAO instrument, is the first to show spiral arms in a circumstellar disk. The disk itself is some 14 billion miles across, or about twice the size of Pluto's orbit in our own solar system. (Credit: NAOJ/Subaru)

The name of the star is SAO 206462. It’s a young star more than four hundred light years from Earth in the constellation Lupus, the wolf.  SAO 206462 attracted attention because it has a circumstellar disk–that is, a broad disk of dust and gas surrounding the star. Researchers strongly suspected that new planets might be coalescing inside the disk, which is about twice as wide as the orbit of Pluto.

When they took a closer look at SAO 206462 they found not planets, but arms. Astronomers have seen spiral arms before: they’re commonly found in pinwheel galaxies where hundreds of millions of stars spiral together around a common core. Finding a clear case of spiral arms around an individual star, however, is unprecedented1.

“Detailed computer simulations have shown us that the gravitational pull of a planet inside a circumstellar disk can perturb gas and dust, creating spiral arms,” says Carol Grady, an astronomer with Eureka Scientific, Inc., who is based at NASA’s Goddard Space Flight Center. “Now, for the first time, we’re seeing these dynamical features.”

Grady revealed the image to colleagues on October 19th at a meeting at Goddard entitled Signposts of Planets.

Theoretical models show that a single embedded planet may produce a spiral arm on each side of a disk. The structures around SAO 206462, however, do not form a matched pair, suggesting the presence of two unseen worlds, one for each arm.

Grady’s research is part of a five-year international study of newborn stars and planets using the giant 8.2 meter Subaru Telescope. Operated by the National Astronomical Observatory of Japan, Subaru scans the heavens from a perch almost 14,000 feet above sea level at the summit of the Hawaiian volcano Mauna Kea. From there it has a crystal-clear view of innumerable young stars and their planet-forming disks throughout the Milky Way.

“What we’re finding is that once these systems reach ages of a few million years—that’s young for a star–their disks begin to show all kinds of interesting shapes,” says John Wisniewski, a collaborator at the University of Washington in Seattle. “We’ve seen rings, divots, gaps–and now spiral features. Many of these structures could be caused by planets moving within the disks.”

However, it is not an open and shut case. The research team cautions that processes unrelated to planets might give rise to these structures. Until more evidence is collected–or until the planets themselves are detected–they can’t be certain.

Whatever the cause of the arms, their reality is undeniable and the great catalogue of stars has one more type.  Stay tuned to science@nasa [1] for future entries.

Footnote: (1) “There have been other examples of circumstellar disks imaged with partial spiral arms or blurry spiral arms,” notes Marc Kuchner of Goddard, who organized the conference. “So it’s not completely unprecedented. But this is really the first clear image of this phenomenon–clear enough that you could trace the arms and possibly use them to make quantitative inferences about what’s causing them.”