Fort Campbell, KY – “Love is never wasted, love is never lost, love lives on and sees us through sorrow,” said President Ronald Reagan during the December 16th, 1985 Fort Campbell memorial service held for the victims of Arrow Airlines flight 1285, which killed 248 Screaming Eagle Soldiers, majority being from 3rd Battalion, 502nd Infantry Regiment, 2nd Brigade Combat Team, 101st Airborne Division (Air Assault). “From the moment love is born, it is always with us, keeping us aloft in the time of flooding and strong in the time of trial.”

The Strike Brigade continues the love of its Gander fallen by honoring and recognizing the importance of their accomplishments more than a quarter of a century ago. 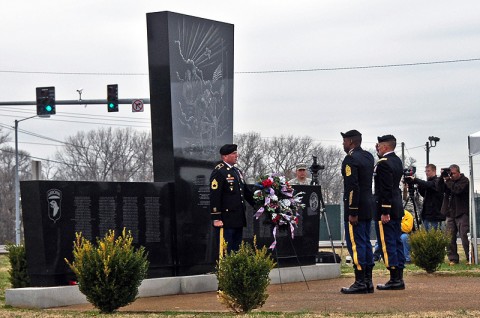 “Twenty-six years ago in 1985, though we did not know it at the time, we were experiencing the winning years of the Cold War,” said Col. Dan Walrath, commander of the 101st’s 2nd BCT, during the Gander Memorial Service held at Fort Campbell, KY, December 12th. “This is a war that did not involve fighting or combat action and our Army was becoming involved in a new mission set, referred to as peace keeping. The United States had recently begun participation in the Multinational Force and Observers duty in Sinai, Egypt.”

The MFO monitored Egypt and Israel’s compliance to the terms of the Camp David Accords, a treaty that laid out the framework for peace between the two enemies. Since 1982, many nations have provided units from its military branches, the United States contributing the majority of forces. Even today these forces are deployed to the Sinai, a large triangular peninsula connecting the two nations. The Screaming Eagles sent 3rd Battalion in 1985.

“At the time, this duty was known as a real-world mission and a mission of significant importance to our country and the United Nations to maintain stability in a region that had only recently known violence and conflict,” said Walrath. “Then as now, Strike Soldiers had fought where told and won where they fought.” 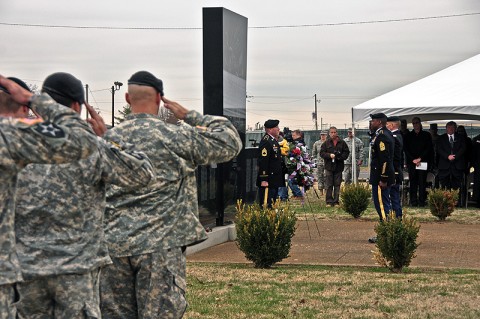 Today’s Strike Soldiers and leaders understand the value of the accomplishments made back then and can relate as they were the real-world mission while operating in southern Afghanistan less than a year ago.

“It’s very important to remember where we come from, where our history comes from and knowing they gave their best on a daily basis,” said 1st Sgt. David Ward, the first sergeant of Headquarters and Headquarters Company, 2nd Brigade Special Troops Battalion, who attended the ceremony. “They were on the front lines as we were on the front lines doing missions… I draw parallels to them…how would I feel and react to a plane full of today’s Soldiers going through a tragedy like they did. Knowing what the Soldiers of this brigade had done before us, how dare we not do our best on a daily basis.” 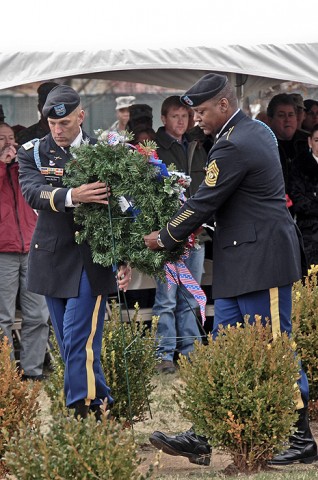 A ceremonial wreath was laid by Walrath and Command Sgt. Major Alonzo Smith, Strike’s command sergeant major, at the center of the memorial, which has the MFO insignia and names of the 248 fallen Soldiers etched into the monument. Strike Soldiers dressed in their formal attire to be a part of the service.

“I am honored, very much so, to be a part of this event and it’s a privilege to honor our fallen comrades,” said Sgt. 1st Class Rocio Picazarri with HHC, 2nd BSTB and a wreath holder for the ceremony. “We can never forget yesterday’s Strike Soldiers, they’re the ones who paved the way for us today.”

Upon completion of the wreath laying and the playing of taps for the heroes of Sinai, family members, Soldiers and veterans paid their respects at the monument.

“Seeing the Soldiers here honor my brothers is real important because we can’t forget these guys and we can’t forget how hard it was on the families,” said (R) Sgt. 1st Class Joe Casper, formerly with 3rd Battalion, was a part of the MFO in Sinai and had friends who was aboard flight 1285. “It was a real tragedy losing them and a lot goes out those Soldiers, but we must also remember it was so hard for the families.”

Casper and former Sgt. Michael Sinko, who was a part of the MFO’s first deployment to Sinai in 1982 and also served with 1st Battalion, 502nd Infantry Regiment, have attended the Fort Campbell ceremony for the last four-years and are pleased with the job the 101st does in honoring the Gander fallen.

“When we first started coming here for the memorial, there were very few people, but recently the attendance has really picked up and it warms my heart to see so many people with an understanding of who these 248 troops were,” said Sinko. “This is so valuable to so many.”