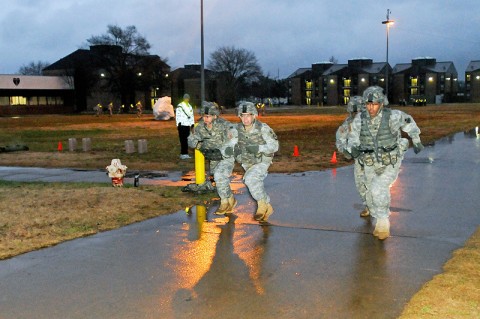 The competition is a monthly event where teams from each battalion within the brigade compete in a series of physical events. The winners received a four-day pass, Certificate of Achievement and a brigade coin. Winning teams also have their name engraved on a plaque which is then displayed in Strike Academy, where new Soldiers to the unit are trained on the brigade’s history.

This specific competition was slightly different than previous, said Sgt. 1st Class Michael Duquette, the operations non-commissioned officer with brigade plans in charge of the competition.

“We increased the run distance to make this a real smoke-session,” said Duquette. “Instead of just running between events, the Soldiers run 800-meters several times. It comes out to about two and-a-half miles of running.”

The events were also centrally located in the brigade’s headquarters area instead of being spread out across the entire training area as had been the previous design. 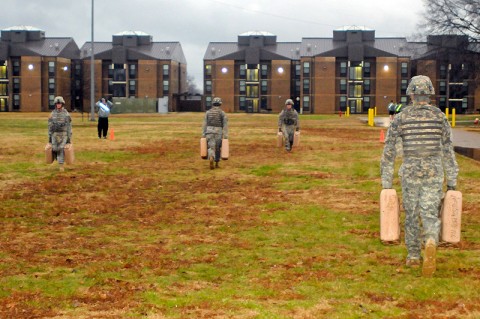 To top off the physically-demanding competition, the Soldiers must participate while wearing full body army and other uniform requirements. Any piece missing from the uniform, such as a water source, identification tags, personal medical kit or pouches, counts against the team for additional time points. The team with the fewest uniform deficiencies and fastest overall time wins the event.

“We had good motivation,” said Sgt. Adam Kimbrell, with Company D and member of the winning team. “All these guys in my team are in good shape; they’ve got a lot of drive in them to win and represent Strike Force.”

The series of events started with a run, then moved to more training-focused events. The Soldiers climb ropes, tossed medicine balls over a wall which they then climb over, pulled a medical litter called a skedco and carried water jugs. Between each event the Soldiers would continue to run 800-meters each time.

“It was all pretty tough but the worst was pulling the skedko,” said Spc. David Beadles, with Strike Force’s Dog Company. “We had to spread ourselves out over each event and not get too-involved. Otherwise we would have gotten exhausted just doing one thing and fail all the others.” 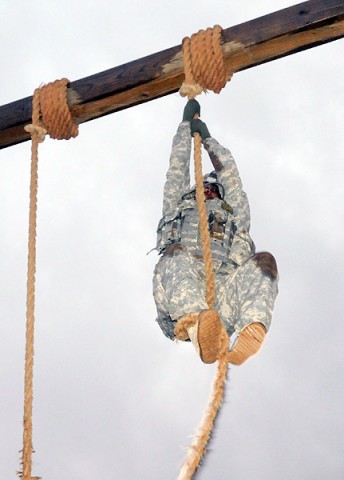 Much of the motivation to win came from an internal source, but was helped out by teammates, said Spc. Karl Schirmer, also with Company D.

“Towards the end the team started to be my motivation,” said Schirmer. “I became the last man running as things went on, but the team pushed me to do my best. This is definitely hard work.”

The new outlay of the events increased the physical demands on the Soldiers while allowing them to perform at a better rate.

“The rope climb used to be last, but we found out most people were so exhausted by that point that they couldn’t make it up at all,” said Duquette.

Now the rope climb is one of the first events, allowing Soldiers to use their full upper-body strength without being limited from over exertion.

“This competition is definitely the biggest smoker so far,” said Spc. Thomas Lewis, a member of the winning Strike Force team. “I’ve been a part of other Strike Iron Competitions, but this is definitely the hardest. The 800-meter sprint really gets you.”

Strike Force has won the Iron Strike in the past and looks to gain more bragging rights in the future as they participate in an a competition preparing the Strike Soldiers for a combat environment.