Clarksville Police are Looking for Two Men on a Shoplifting Spree

Clarksville, TN – The Clarksville Police Department is looking for two men; David Preston Saunders charged for a July 4th, 2011 Aggravated Robbery of Walgreens released on Bond in August, picked up on December 7th, 2011 for Fraud, released on Bond again and Joseph Brent Adkins released from jail in October 2011 after serving time for a DUI charge. 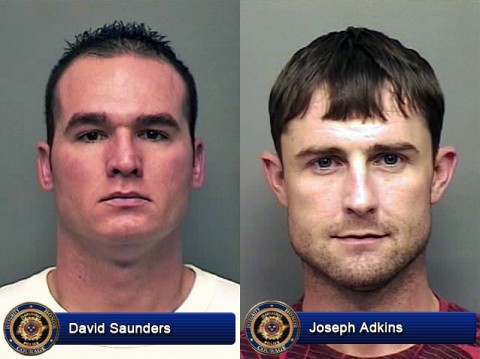 If the vehicle or suspects are spotted, call 911.

David Preston Saunders (W/M, DOB: 7/23/84) has been on a shoplifting spree at local area stores. He has nine outstanding warrants on file — Seven Theft (4 Felony) and 2 General Sessions Capiases.

He has taken over $4,500 in merchandise from stores in the Wilma Rudolph Boulevard and Madison Street area. Also, Saunders is no longer in the military.

Saunders may be in the company of Joseph Brent Adkins (W/M, DOB: 3/29/79), an AWOL soldier, who has six outstanding warrants on File — Two Theft (Felony), 3 General Sessions Capiases, and a Petition to Revoke.

He took over $1,800 of merchandise taken from a Wilma Rudolph Boulevard store. Adkins has been out of jail since October 2011 after serving time for a DUI charge.