Morehead, KY – If it seemed like Austin Peay State University’s basketball team had been there before, it had. Unfortunately, the ending was eerily too similar.

Holding a five-point lead with a little more four minutes remaining, Austin Peay watched Morehead State rally down the stretch to beat the Governors, 68-64, in an Ohio Valley Conference game televised by ESPNU. 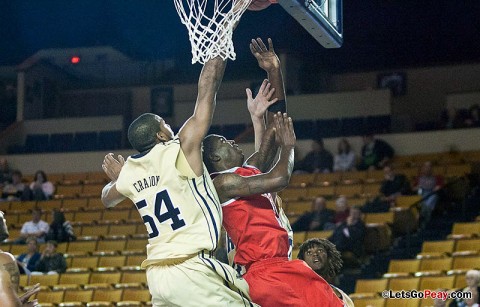 Morehead State, meanwhile, improved to 7-8 overall and 1-1 in the OVC.

Like multiple games this season, the Govs followed the same script, falling behind early only to rally in the second half to gain the lead but then give up the margin late because of their own missteps.

With Austin Peay leading 59-54 with 4:24 remaining, Morehead State Lamont Austin nailed a three pointer with 4:02 to make it a two-point game.  However, senior Josh Terry, the game’s leading scorer with 24, made it a four-point game by making a layup.

But Ty Proffitt nailed a second Morehead State three pointer in less than a minute to cut the deficit to one, 61-60, with 3:11 left.

Both Terry and Melvin Baker, the Govs consistent offensive performers all night long, could not convert jumpers, leading to the Govs’ fouling Terrance Hill with 2:25 left. Hill made both free throws to give Morehead the lead.

Austin Peay then committed a turnover on its next possession and Hill went the other way, being fouled on a drive to the basketball. He made one of two free throws to give the Eagles a two-point lead, 63-61, with 1:57 left.

Terry then was fouled by Morehead State, putting him at the line for two shot to potentially tie the contest. However, after making the first, he missed the second. But Terry tracked down the rebound in front of the Govs bench was fouled again.

He made both free throws to give Austin Peay the lead, 64-63, with 1:37 left. But those would be Austin Peay’s final points.

Hill drove the lane against the Govs and fell to the floor with the ball falling into Kahill Owens hands underneath. He made the layup with 1:15 left.

On Austin Peay’s next possession Terry could not finish inside a contested shot. Morehead State got the rebound and Austin was fouled with 29 seconds left. He made both free throws with to make it a 67-64 contest.

TyShwan Edmondson then missed a lane jumper with Terry also failing to connect on a short follow up with eight seconds left. This time Morehead grabbed the rebound and Austin again was fouled. He made both free throws to ice the game.

The Govs got off to an inauspicious start, falling behind 14-5 while being outrebounded 12-2 in the early going. They rallied late in the half to make it a two-point game entering intermission, despite shooting just 32 percent (8 of 32) in the opening half.

With Terry and Baker taking over in the second half, the Govs gained momentum but inopportune mistakes opened the door after the Govs led by six with 5:26 left.

Hill led Morehead State with 15 points before being helped off the floor in the final minutes with a lef injury. Owens added 11 and Proffitt 10.

The Govs finished the night with 40.4 percent shooting (21 of 52), although Morehead State wasn’t much better (21 of 50/42 percent). However, the Eagles were able to make three pointers compared to just two by the Governors.

The Governors next game is Saturday, January 7th at the Dunn Center in Clarksville, TN as they face the Murray State Racers. Tipoff is at 7:00pm and will be broadcasted on ESPNU.