Clarksville, TN – It has been a dream season for Murray State so far. The Racers are off to a 15-0 start, including a 3-0 Ohio Valley Conference mark, under first-year head coach Steve Prohm. The Racers were expected to be good, but no one could have seen this coming.

Murray State is one of just four remaining unbeatens in the nation and are ranked No. 19 in this week’s Associated Press poll as they face the Austin Peay Governors, 7:00pm, Saturday in a renewal of the OVC’s best rivalry to be telecast by ESPNU. 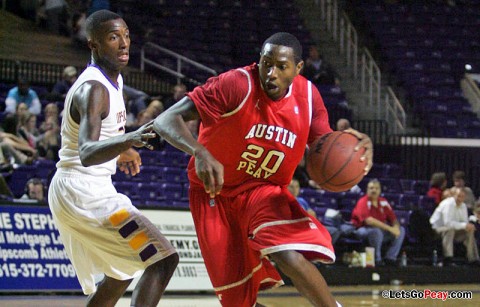 Murray State is ranked 20th nationally in field-goal percentage (48.8 percent), including fifth in three-point shooting (43.9 percent) and 11th in free-throw shooting (75.8 percent). Defensively, they are allowing under 60 points (59.5 ppg) while averaging 9.3 steals per contest.

In other words, the Racers perform on both ends of the floor. Junior guard Isaiah Canaan, a leading early candidate for OVC Player of the Year, leads the way at 17.6 ppg while Donte Poole, who moved into the starting lineup this season, is at 13.3 ppg and forward Ivan Aska is at 12.6 ppg. However, the senior Aska broke a knuckle last week against Eastern Illinois and didn’t play Wednesday against Eastern Kentucky.

Austin Peay, meanwhile, continues to seek answers. The Governors led late against both Eastern Kentucky and Morehead State, only to watch the respective games slip away down the stretch.

The good news is the Governors showed improvement defensively in both contests, holding both Eastern Kentucky and Morehead State to less than 70 points. The bad news was the Governors struggled offensively in both games. Shooting (41.7 percent against Eastern Kentucky and 40.4 percent versus Morehead State) continues to be a recurring problem. The Govs also committed inopportune turnovers.

Josh Terry scored a season-high 24 points against Morehead State while Melvin Baker added 17. However, no other Gov reached double figures during the contest.

The Series: This is the 115th meeting between the two OVC rivals, Austin Peay and Murray State, with the Governors trailing, 73-41. The two teams split last year’s two meetings, the Govs winning, 66-64, in Murray to snap the Racers’ 25-game homewinning streak. However, the Racers turned the tables in Clarksville by claiming a 67-58 verdict. APSU owns a 12-11 lead in the series since 2000-01.

When Austin Peay lost to Eastern Kentucky and Morehead State last weekend it was the first time since the 1997-98 season APSU has opened OVC play at 0-2.

Lost in the Govs scoring problems has been their improved defense. Over the weekend, APSU limited Eastern Kentucky and Morehead State to a combined 42.5 percent shooting and 67.5 points per contest.

Although the Govs saw their streak of out-rebounding the opposition end at three when Morehead State held a 34-30 advantage,  Saturday, the Govs have had a recent impressive board performance. In the last four contests, APSU held a 36.0-to-32.5 rebounding advantage. That included a 43-28 advantage against Eastern Kentucky.

Senior forward Josh Terry averaged 19.5 ppg in two contests last weekend, including 24 points at Morehead State. That 24 points, which included a career-best 12 free throws made, was the second most in his career and third 20-point outing this season. He also had seven rebounds for a second straight game.

Two nights earlier, Terry snapped a two-game single-digit scoring streak with 15 points against Eastern Kentucky on 7-of-15 floor shooting. He also had a gamehigh five assists, matching his career high.

Whey They Are Free

After shooting a season-low 45.5 percent (10 of 22) from the free throw line against Belmont, December 21st, the Govs bounced back to shoot a combined 74.4 percent from the freethrow line last weekend against Eastern Kentucky and Morehead State, including 76.9 percent (20 of 26) against the Eagles, Saturday.

In the OVC-opening weekend, Austin Peay connected on a total of five three pointers, including a 2-for-12 effort against Morehead State. Over the last three games, the Govs had connected on just 10 three pointers, 8 coming from senior guard TyShwan Edmondson. As a result, the Governors remained unranked in NCAA statistics for field-goal percentage as it requires a minimum of five  three-point makes per game. The Govs are averaging just 4.0 three-pointers per game.

At EKU, the Govs started Jerome Clyburn and TyShwan Edmondson in the backcourt, with Josh Terry and Melvin Baker at forward along with John Fraley at center. APSU used seven different lineups for the entire 2010-11 season.

Junior forward Anthony Campbell will return to campus to continue his rehab after undergoing surgery last Thursday for a torn anterior cruciate ligament in his left knee along with tears in his medial and lateral menisci. Campbell, who missed much of the 2010-11 season with a torn ACL in his left knee, suffered the same ACL tear this fall.

Then against Arkansas State, December 5th, he suffered tears in the medial and lateral menisci. Campbell was a second-team All-OVC selection in 2009-10 and was preseason All-OVC in the last two seasons.

Edmondson averaged 21.3 ppg over that four-game span, shooting 51 percent from the floor. Edmondson, however, was held to only seven points at Morehead State.

Senior forward Melvin Baker saw his streak of eight straight double-figure scoring games end at Eastern Kentucky when he finished with six points. Baker, who was 2-of-8 from the floor on the night, picked up a technical foul with 8:21 left in the game and was not re-inserted into the lineup by head coach Dave Loos. Baker did have eight rebounds, three assists and two blocked shots in 26 minutes of play.

Baker bounced back last Saturday with 17 points on 7-of-13 shooting, six rebounds and two blocked shots against Morehead State. He and Josh Terry were the only two Govs to reach double figures against the Eagles.

With TyShwan Edmondson back in the starting lineup against Eastern Kentucky, the Govs’ bench production noticeably slipped. APSU received just 11 points from its reserves on just two-of-eight shooting.

Against Morehead State, APSU reserves scored 12 points as forward Will Triggs scored seven of them, including a three-for-three game from the floor.

Not So Frail Work

When John Fraley recorded 14 rebounds against Eastern Kentucky it tied for the center’s second most single-game rebounds during his four-year career.

It also was the most rebounds by a Gov since he had 18 against Tennessee State, February 13th, 2010.

When John Fraley scored 15 points and grabbed 14 rebounds versus Eastern Kentucky, December 29th, it was his first double-double this season and his career’s 13th.

For a second straight game Austin Peay was charged with 17 turnovers in its loss to Eastern Kentucky. After committing six turnovers in the first half, the Govs almost doubled that figure in the second half, with four coming in the final 2:29 of the game.

When Austin Peay was credited with 15 assists against Eastern Kentucky, 11 of the 15 came from the forward positions. Forward/guard Josh Terry led the way with five while Will Triggs and Melvin Baker each had three.

Two weeks later, Govs and Colonels to hook up for second time One thing for sure, Austin Peay’s basketball team will not need to be reminded of what happen in the OVC opener at Eastern Kentucky. It should be fresh on their minds–the Govs had an OVC-opening win within their grasp–a late 10-point lead with four minutes left to only watch EKU end the contest on a 17-5 run.

In fact, the Govs committed four turnovers in the final 2:29 to aid the Colonels comeback. EKU, 3-1 in the OVC, proved it was for real against Murray State by trailing by only three in Murray with less two minutes left. Guard Jaron Jones had 23 points against the Racers.