Clarksville, TN – The Clarksville Police Department is asking for the public’s assistance to locate a man on Probation for Especially Aggravated Burglary and Coercion of a Witness who now has a Burglary warrant on file.

On January 5th, 2012, around 4:33am, officers responded to an alarm activation at the Smoke 4 Less convenience store, 1728 Memorial Drive. They found the business had been forcibly entered by breaking the glass out of the door. 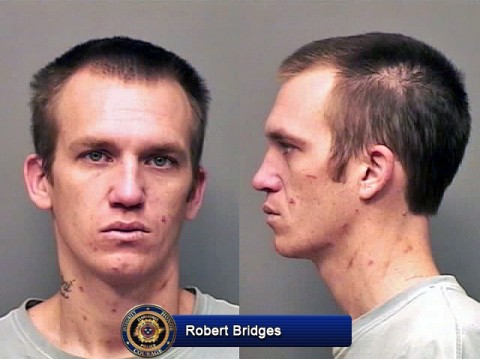 Once inside, the burglar attempted to break into a coin and dollar vending machine game using a hammer, causing extensive damage to the coin machine.  The suspect that entered the business was identified as Robert Joseph Bridges, a white male born February 11th, 1983.  He is 6’0, 160 lbs with brown hair and blue eyes.

Anyone with information can confidentially contact the Clarksville Police Department by calling the TIPSLINE, 931.645.8477.

Video from the Burglary