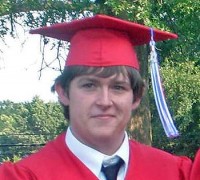 Cunningham, TN – On Saturday, January 21st at 6:00pm a Fundraiser Auction held at the Montgomery Central High School’s Thomas-Young Gym for Brady Conatser, a young man who was paralyzed in a fall during a fainting episode. All the money raised will help pay for Brady’s medical and rehabilitation bills.

Conatser, a 2011 graduate of Montgomery Central, was paralyzed on December 27th when he became light headed and fell hitting his head on a truck bumper and then again on a bolt that was part of the car lift. He damaged his c-4 vertebrae, breaking his neck. He is currently in Atlanta, GA at the Shepherd Center a world renowned rehabilitation center that specializes in spinal cord injuries in young people.

In order to bid, you had register and get a bidders number. 120 people registered to bid.

Clarksville Online and Discover Clarksville streamed live video of the event over the Internet so Brady could watch it from a laptop in his room. “Brady was so excited to be able to watch the auction.” commented Vicki Self, Brady Conatser’s mother. “He could not believe the number of people that showed up for the event.”

There was a full concession stand that was stocked with hamburgers, hot dogs, sausage, chips, candy bars and sodas. All of the food, drinks and ice were donated by local businesses. “I want to personally thank all of the businesses that donated items to the concession stand.” stated Perry. “I would especially like to thank Blackwell Construction for donating all of the food.”

Other parts of the fundraiser included a 50/50 raffle. Tickets were $1.00 each or 6 for $5.00. The money raised from ticket sales would be split evenly between the winner and the fundraiser.

T-Shirts were sold that had “Prayers Hope & Faith for Brady” on the front over the heart and “The Task ahead of you is never as great as the Strength within you” printed on the back. T-Shirts were $20.00 each.

There was also a donation jug.

The auctioneer was Neal Trice, who donated his services for the evening.

There was well over a hundred items in the auction, which were donated by individuals and businesses throughout the community. A row of tables started at one end of the basketball court and ended at the other. Each table was overflowing with items. There was a second row of larger items that would not fit on a table.

Some of the items in the auction were a $400.00 Gift Certificate for a Dual Exhaust, leather jacket, hand paintings, computer system, charcoal grill, Dale Earnhart Jr. Hood, baked items, and up to $600.00 towards a set of tires just to name a few.

There were so many items that it was nearly 11:00pm before everything was auctioned off. “I can not say enough about the community we live in. Once word got out that we needed items, individuals and businesses alike started sending in items for the auction.” stated Tiffany Perry. “I want to thank everyone that donated to the auction and everyone that came out tonight.”

As the night came to a close, there was one last thing to be done. Draw the winning ticket for the 50/50 raffle. The total in the raffle was $560.00. The winner of the raffle was Joe Self, Conatser’s step grandfather. He immediately donated his winnings to the fundraiser. “Brady needs the money.” Self said.

“This event was a huge success. It turned out better than any of us could imagine.” stated Perry. “I want to take this time to thank everyone again for coming out tonight. I want to thank all of our volunteers for the evening and I want to thank Montgomery Central High School and Will Ferrell for allowing us to use the gym.”

“Brady Conatser is a former student of ours and we are glad we could help out.” stated Will Ferrell, Montgomery Central High School Assistant Principal. “Central takes pride in being a community school and tonight was a chance to show it.”

On March 10th, there will be a fundraiser at Cheap Shotz Sports Bar & Grill located at 688 Chesterfield Circle Clarksville, TN.

Clarksville Online will keep you informed of all upcoming fundraisers for Brady Conatser.

To keep up with Brady’s progress visit his website at www.bradysjourneytorecovery.com.

For more this story, see: Family to hold Fundraiser Auction for Teen Paralyzed in Fall