Clarksville, TN – After dropping four consecutive games, the Austin Peay Lady Govs entered Saturday night’s matchup against the Tennessee State Lady Tigers desperately seeking a win to prove to the rest of the conference that they still had a pulse.

And, and after overcoming a 12-point second-half deficit, the Lady Govs proved they are still very much alive. 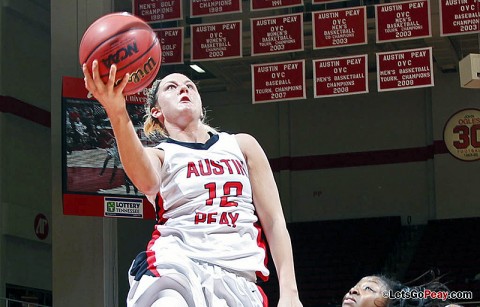 Unfortunately for the Lady Govs, the Lady Tigers came up with clutch shots down the stretch and got stops when they needed them to hang on for a 82-77 victory.

Playing without injured forward Meghan Bussabarger, who missed her fourth consecutive game with a concussion, the Lady Govs (5-17, 2-7 OVC) hung tough on the boards in the first half, outrebounding the Lady Tigers 23-14.

After enjoying that halftime rebounding margin, however, the Lady Govs were were on the wrong end of a 30-17 rebounding tally in the second half which ultimately cost them against their instrastate rivals.

“I was proud of the way our team fought down the stretch tonight,” Lady Govs head coach Carrie Daniels said. “But give credit to Tennessee State. We gave up too many offensive rebounds and they made us pay.”

Kaitlyn Hill led the way down low for the Lady Govs, recording her second straight double-double with 10 points and 10 rebounds.

Whitney Hanley had another big offensive night, scoring 30 points – 21 of which came in the second half – on 12-of-22 shooting.

“I didn’t necessarily come down the court looking to score the basketball,” Hanley said. “I tried to make the best decision. If I had an open lane or shot, I took it.”

Facing another second-half double-digit deficit, the Lady Govs put together a scrappy comeback in the game’s final 15 minutes thanks to strong rebounding and solid defense.

In the end, however, a balanced scoring effort from the Lady Tigers proved too much.

TSU finished with five players in double figures – led by 17 points from Kesi Hess, the last of which came at the free throw line to preserve the win for the Lady Tigers (8-13, 4-5).

Shuler, who starred at Kenwood, finished with 14 points on 6-of-16 shooting.

“We never really recruited her in high school,” Daniels said. “Obviously we kind of wish we had right now because she’s playing so well at TSU. She really had a big game.”

Jasmine Rayner added 13 points and Shelby Olszewski scored 10 in the loss for the Lady Govs, who dropped their third consecutive home contest and fell a game behind the Lady Tigers for ninth place in the OVC.

The loss also marked the first time the Lady Govs were swept by TSU in the regular season since the 2008-2009 season.

“We were so close to getting over the hump in this one tonight,” Hanley said.

And when asked if there was a recipe for a victory when the team travels to Southeast Missouri on Monday, Hanley said the answer was simple.