HomeEducationJust How Many Students Would You Like in Your Classroom
Education

Just How Many Students Would You Like in Your Classroom

Let’s look at this scenario in daylight and see how it might play out.

By the way, Sam Stockard reports in the Nashville Tennessean on Sunday, February 5th, that this is getting a cool reception in the Legislature. Could it be that constituents (parents, educators, people concerned that education would be damaged irreparably) are letting their Legislators know that this is unacceptable?

(Just as an aside, Governor Haslam also wants to eliminate the teacher salary scale to provide more money for higher education. In Robertson County, the annual raise averages $300; as little as this is, it is absolutely essential to poor teachers who are struggling to keep up with the cost of living. The thought of losing this small amount is heaping coals on the fire of many teachers who are in the process of deciding whether or not they will teach again next year.) 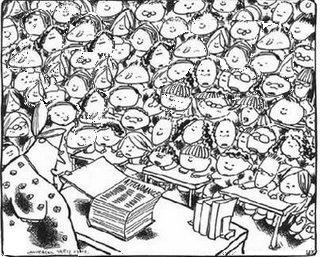 Think about this. You have smaller classes in high school than in kindergarten! I suggest that we send a group of four- and five-year-olds to the Governor’s office and to visit each Legislator for a week. (Teachers have these little ones for 200 days!) Once these politicians have found out what it’s really like to teach these little ones, they just might change their minds about how many need to be placed in a room together.

Small children who enter school for the first time are not used to a routine. Many are scared and just want their parents or guardians. Some cry for hours on end. Most need to go to the bathroom numerous times a day—and sometimes don’t make it on time. That is just the beginning. Some can’t get along with others and kick, bite, pinch, punch or scream at others. Crowd control is a daily activity. Complaints of “he won’t be my friend” or “I want that marker now!” are not uncommon. Some kids have never held a pair of scissors before. Some are reading at a second grade level. A pinprick with a drop of blood oozing out can cause a major meltdown.

Teaching kindergarten—or any primary grade—is not for the faint of heart!

Contrast that with teaching 22 high school students in a classroom. High school classes last 90 minutes. Here are young adults whose main purpose for being in school (for many of them) is socializing. High school teachers can assign long papers that require individual effort; no high school student would be caught dead having a bathroom accident requiring a new set of clothes or go up to the teacher to ask to go to the nurse for one drop of blood from a paper cut.

Get the picture. Whoever decided that small children should be herded together in large groups was definitely not inclined to be nominated for the Nobel. A group of fifteen kindergarten children or first graders is a handful; 25 is a nightmare. I’ve seen this scenario one year when we were waiting for a portable classroom for the fifth teacher in our kindergarten. Just moving 25 kindergarteners from one place to another is a major event. Learning to walk in a line is a major accomplishment for many of them. You’re just lucky if you don’t have a “runner” in the group. (Yes, indeed, some small children feel that bailing out of school is their primary goal because it really wasn’t their idea to go to school in the first place!)

Don’t hesitate if you are a thinking adult to let your Legislator know how you feel on this subject.

Our fifth graders, eighth graders and eleventh graders have to take the TCAP (or equivalent) tests each year—and they don’t need to be in crowded situations with tremendously stressed teachers trying to cover the extensive amount of material over which they are tested.

Overcrowding students results in the same type of scenario that overcrowding rats does—fights and misbehavior. Children want attention full time. They will get it one way or another. When the teacher has too many students in the classroom, lower instincts take over. Small groups of children may form gangs of one type or another. Girls will bully other girls by excluding them from the group. Boys will act out and get into confrontations.

Teaching is difficult at best. Reducing salaries for some and increasing salaries for others who are doing the same job leads to anger, frustration, and bad feelings that are not conducive to a happy school. Tests that are supposed to prove one teacher is better than another are not foolproof. Any teacher can have a group of students who are underachievers one year and have a group of high achievers the next. Teachers take what they get. Even on a good day, some children are not going to perform at top capacity on a test.

Children do not respond well to lack of attention. Overcrowding a classroom is a poor remedy to use for saving money.

Let’s let the educators teach and improve the school systems. We have too many arm chair jockeys trying to “improve” the system. Some ideas just make things worse—and adding more kids to a classroom is near the top of the list!

Sue Freeman Culverhousehttp://culverhouseart.com/
Author of Tennessee Literary Luminaries: From Cormac McCarthy to Robert Penn Warren (The History Press, 2013) Sue Freeman Culverhouse has been a freelance writer for the past 36 years. Beginning in 1976, she published magazines articles in Americana, Historic Preservation, American Horticulturist, Flower and Garden, The Albemarle Magazine, and many others. Sue is the winner of two Virginia Press Awards in writing. She moved to Springfield, Tennessee in 2003 with her sculptor husband, Bill a retired attorney. Sue has one daughter,  Susan Leigh Miller who teaches poetry and creative writing at Rutgers University. Sue teaches music and writing at Watauga Elementary School in Ridgetop, Tennessee to approximately 500 students in kindergarten through fifth grade. She also publishes a literary magazine each year; all work in the magazine is written and illustrated by the students. Sue writes "Uncommon Sense," a column in the Robertson County Times, which also appears on Clarksville Online. She is the author of "Seven keys to a sucessful life", which is  available on amazon.com and pubishamerica.com; this is a self-help book for all ages.
RELATED ARTICLES
Education