Try telling that to TyShwan Edmondson.

Coming off the bench for a second straight game, Edmondson bounced back for one of his better performances of the season, scoring 23 points as the Govs hung on for a 71-68 victory in the Dunn Center.

“We needed a win,” Edmondson said. “We have been losing a lot of close games that we haven’t been able to pull out at the end. Today we pulled it out and we held on and we got the win. It feels good.”

Mired in a four-game conference losing streak, the Governors looked lifeless early Saturday as the Penguins raced out to a 9-0 run just three minutes into the game, prompting Austin Peay head coach Dave Loos to call a quick timeout. 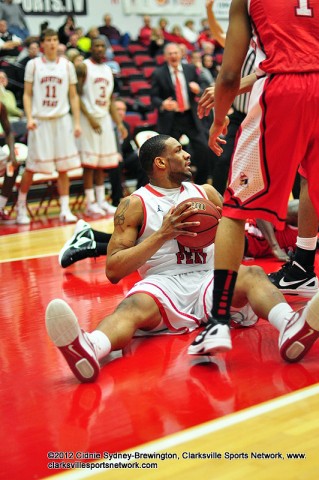 “I can’t remember exactly what I said,” Loos said. “I was just trying to stop the bleeding. We just needed to try and stop their momentum.”

Whatever Loos said, it seemed to have worked.

After Loos called a timeout, the Govs seemed to catch a spark behind the play of Edmondson and reserve big man Will Triggs – who provided high energy despite playing just five first-half minutes.

“I thought Will really brought it tonight,” Loos said. “He really got us going with his play on both ends of the floor. The rest of the team seemed to respond to his intensity.”

The Govs eventually trimmed the Penguins lead to 33-28 at the halftime break before making a run of their own in the second half.

“Everybody started clicking (in the second half),” Josh Terry said. “We treated this game like a conference game tonight and I think everyone responded.”

The Penguins wouldn’t go away quietly, however.

Just when it looked like the game was in hand for the Govs, the Penguins sank back-to-back jumpers to trim the lead to 66-65 with 15.4 seconds left in regulation.

After Jerome Clyburn swished home 1-of-2 free throws, the Govs forced a Penguins turnover with 7.3 seconds left in the game.

Edmondson then sank his 22nd and 23rd points of the night at the free throw line, extending the Govs lead to 69-65 with eight seconds to play.

Kendrick Perry quickly raced down the court and rattled home a 3-point basket, putting the pressure back on the Govs at the free throw line.

Terry, however, sank both charity tosses for his 13th and 14th points of the night and Perry’s ensuing halfcourt heave at the buzzer missed the mark to give the Govs their first win since a 92-73 win over UT-Martin on January 28th.

“We work on them every day,” Terry said. “We didn’t want to beat ourselves. We’ve done that before by missing free throws in a couple of games. We wanted to concentrate and go to the line and knock them down.”

The Govs also tracked down a season-high 51 rebounds with big men John Fraley and Melvin Baker hauling in 13 each.

Ball security also seemed to be an emphasis for the Govs, who had just 13 turnovers.

A number, Loos said, that was improved but could be even better.

“Ideally we’d like to keep it under 12 turnovers a night,” Loos said. “But we had so many second chance opportunities tonight it kind of made up for the turnovers.”

And while Loos said the team may have treated the Govs ninth BracketBusters appearance like a conference game, they didn’t have much of a choice otherwise.

“It wasn’t necessarily that,” Loos said. “We were kind of desperate for a good game. I think we needed a win and we needed a great effort. We only shot 33 percent but I think our effort made the difference.”

Wade Neelyhttp://www.twitter.com/WadeNeely
Wade Neely comes to Clarksville after beginning his sports media career in March 2010 as the Sports Director at WKSR AM-FM in Pulaski, Tenn. During his time at WKSR, Neely created, produced and hosted "The Wade Neely Morning Show", Pulaski's only live and local wakeup program on WKSR-AM. Neely also served as the "Voice of the Bobcats", providing play-by-play for all Giles County football, basketball and select baseball contests. Neely also served as Director of Broadcasting at Martin Methodist College beginning in January 2011, providing play-by-play for all RedHawks home contests as well as the team's trip to the NAIA National Tournament in Kansas City. Originally from Pulaski, Neely earned his B.S. in Electronic Media Communication from Middle Tennessee State University's famed College of Mass Communications. Neely also minored in Economics during undergraduate career.
RELATED ARTICLES
Sports