South Bend, IN – Senior Tanesha Campbell and junior Chantelle Grey, of the Austin Peay track and field team, competed at the Alex Wilson Invitational, this weekend, hosted by Notre Dame at the Loftus Sports Center. 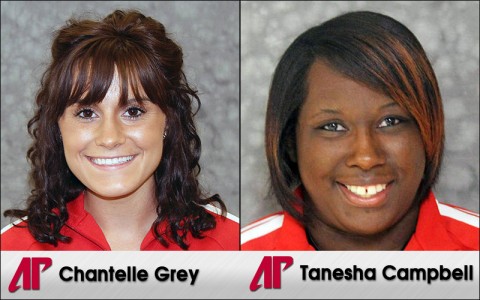 Grey, looking to rebound from a disappointing race at the 2012 Ohio Valley Conference Indoor Championships, had terrific performance in the 800-meter run. The Missoula, MT, native had a personal-best 2:07.72 mark, good enough for eighth place in a field that saw the top three finishers record NCAA automatic qualifying times.

“Chantelle has had an excellent season,” head coach Doug Molnar said. “Even though her time wasn’t enough to get her to the NCAA Indoor Championships, it was and tremendous finish to her season. Looking at where she started the season, she really improved a lot and I couldn’t be more proud of her.”

While her time did not qualify her for the national championships, it was the second-fastest 800-meter time in school history. The APSU school record (2:06.17) belongs to Austin Peay Hall of Famer Sheena Gooding, who also was an NCAA All-American.

“Tanesha was a little under the weather,” Molnar said. “But despite all that, I still feel like she represented herself and our team well. She’s also had a great year. She’s made all the right adjustments and gotten better each week. This was a good way to close it out.”

The Lady Govs now move into the outdoor season, beginning Friday, at the Coastal Carolina Invitational.