Posted By Clarksville Online News Staff On Wednesday, March 7, 2012 @ 1:30 am In Technology | No Comments

Edwards Airforce Base, CA – MUTT is one of the Air Force’s newest X-planes, designated X-56A. The 7.5-foot-long aircraft has a 28-foot wingspan and will be powered by two 52-pound thrust JetCat P200-SX turbine engines. It is being built in California under contract to Lockheed Martin Corp., which will conduct the flight experiments for the Air Force Research Laboratory (AFRL).

Dryden will oversee the flights for AFRL during summer 2012, and than take ownership of the X-56A MUTT for follow-on research after the Air Force tests are finished in early autumn. 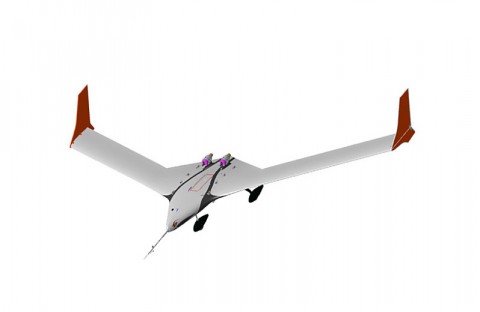 But unlike the short, stiff wings found on most aircraft today, long, thin wings like those on the X-56A are susceptible to uncontrollable vibrations, called flutter, that result from the force of air flowing over them. Thin wings can also be stressed by bending forces from wind gusts and atmospheric turbulence.

“To maintain the long-term health of the structure and ride quality in a more flexible airplane, we need to actively alleviate gust loads on the airplane and suppress flutter, so gust load alleviation and active flutter suppression are two of the key technologies that NASA is working to advance,” Martin said.

MUTT is designed to address this problem by enabling engineers to practice suppressing flutter by adjusting software programs in the aircraft’s flight control computer. With MUTT, researchers also expect to learn how better to ease gust loads, which will make flexible airplanes safer when they experience in-flight turbulence. 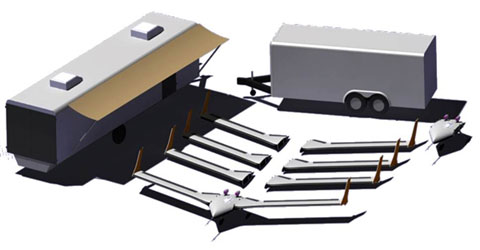 Artist's rendering of X-56A MUTT package, consisting of the aircraft with three additional wing sets and a second fuselage/mid-body (center), flanked by the ground control station on the left and the air vehicle storage/transport trailer on the right. (AFRL/Lockheed image)

Although the X-56A MUTT is a low-speed, subsonic, sub-scale research aircraft, aircraft that fly faster than the speed of sound also can benefit from this research. The knowledge gained about flutter and gust suppression will be used in designing the proposed supersonic X-54, an aircraft that will demonstrate sonic boom-quieting technologies that could someday alleviate the noise concerns currently preventing supersonic commercial flight over land in the United States.