The Power of Women at Customs House Museum

The Choppin’ Block, represented by Jennifer Davis and Brenda Sykes, began the day with a brunch fit for a queen. In addition to juice and Mimosas, the buffet held French toast casserole; an egg-spinach-mushroom-onion casserole; petite Danishes; mixed berry, blueberry and strawberry muffins; and array of fresh fruits including grapes, orange slices, strawberries, honey dew melon, and cantaloupe. An entire room on the second floor of the museum was dedicated to getting to know the other participants while enjoying a delicious feast. 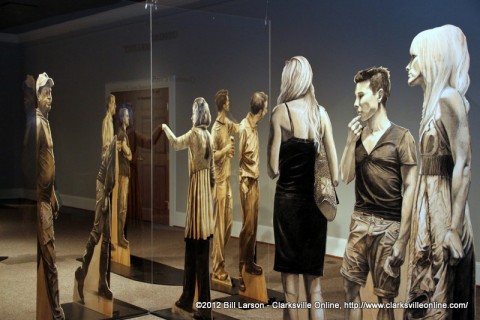 One of the wonderful exhibits currently at the Customs House Museum

Downstairs in the gallery were three exhibits featuring “The Words of Women” with paintings of women’s writing on the walls, an installation piece by Denise Stewart Sanabria titled “Quantum Confusion,” and the clay torsos of Knoxville sculptor Annamaria Gundlach.

In the museum’s beautiful gift shop jewelry artist Heidi Welch of Pleasant View demonstrated her talents. Her very reasonably priced earrings, necklaces and pins (ranging from $10.00 to $60.00) are on permanent display there. 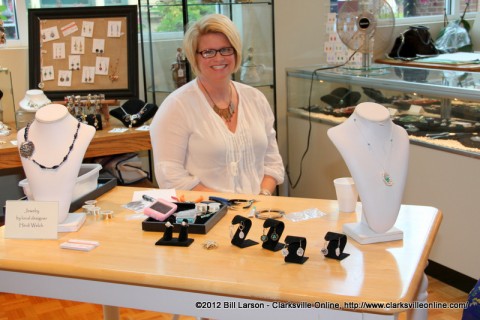 Frazier Allen, WMS, CRPS, Financial Adviser with F&M Bank, spoke on “Investing in Your Future.” He said that since women typically live five to seven years longer than men, it is extremely important that women know as much as possible about the financial situation of their household including what bills need to be paid and where, where bank and investment account information is located, pension plans, etc. Sudden financial decisions can result from a death, divorce or sudden unexpected illness.

Overall, women make better financial decisions than men because they tend to be not as risk oriented and often are more willing to have a financial plan and stick to it, Allen advised. He said women also tend to be better savers but may have less confidence in their investment decisions.

Allen further insisted that when financial arrangements are being made, it is important for both the husband and wife to be included. They need to sit down together and make sure that each is knowledgeable about how their money is being spent and what their plans are for the future. In fact, he said that it is against the law for a financial planner to discuss an account with someone not listed on it unless the owner of the account is present and is willing for the other person to hear the conversation.

Frazier Allen told the audience that a simple way to organize one’s bank information, insurance policies, investment certificates, and other financial materials is to get a three-ring binder and place everything in it. Both spouses also need to know where it is kept in case of an emergency. He also said that it is not necessary to keep any bank statement on paper except the most recent since you can have any former statement available on line through the bank Web site.

Marcia Norfleet, a representative of Shaklee Products, spoke next on “Maintenance and Repair:Hair and Skin as You Age.” The attractive Ms. Norfleet, who revealed that she is a grandmother but appears to be youthful enough to appear as a magazine cover model, talked about beauty arising from within. She asked the women present to think about how they would spend their time if money were no object. She said women typically are so busy looking after their families, their communities, and others in general that they forget themselves.

Ms. Norfleet said she sees beauty in a woman teaching a child to read or one who is running her own business. She said women have “solid minds, warm hearts, and working hands.”

She had five tips for women to follow: (1) invest in yourself (be sure to read something inspirational for at least 20 minutes a day); (2) get your body moving so that you can release endorphins (after drinking eight ounces of water or coffee, just walking for 20 minutes three or four times a week can provide great benefits); (3) make sure you get seven to nine hours of sleep a night; (4) smile because your smile may be the only one another person sees all day; and (5) remember that you are what you eat so good nutrition is essential.

Marcia Norfleet reminded women that most people tend to ignore the fact that muscles are also lost when you lose weight; in fact, the average woman who loses 10 pounds also loses three to four pounds of that amount as muscle. That means you need to reduce your daily calorie intact by 150 to 200 calories a day to maintain that weight. You have to empower your body to look younger.

She said that the beauty product business gleans multi-billion dollars every year. “If you wouldn’t eat it, don’t put it on your skin,” she insisted. Ms. Norfleet introduced several beauty products that are not expensive but give outstanding results. Addressing hairstyles, she said she believes that any beautician can cut hair, but she looks for a “rocking hair stylist who is willing to take my lifestyle and hair into consideration before creating a hairstyle.”

Terri Jordan introduces one of the speakers

Christina (Christy) Bartee, Attorney at Law, from Springfield, Tennessee, spoke on “Estate Planning.” While not the most cheerful of topics, Ms. Bartee said she believes it is of utmost importance to everyone because a life changing event can occur in anyone’s life at any time. Although most people find many reasons to put this off, Ms. Bartee listed ten items everyone needs:

Ms. Bartee added that an Immediate Power of Attorney can be important should someone be sent into a war zone. This way the soldier’s mortgage can be more easily paid, bills for water and electricity can be taken care of, etc. 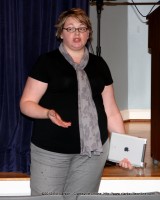 Lorilee Rager discussed “Owning a Business” by talking about her progression from loving to draw as a child to her current graphics design business at the former location of Joy’s Jewelers at 139 Franklin Street in Clarksville. Ms. Rager attended Austin Peay State University and imagined herself within ten years as being the owner of her own business. She discovered her knack for graphics design through use of computers while she was in college studying with Professor Susan Bryant.

After college, she waited tables at Outback Steakhouse for a while and learned how to get along with members of the public. She briefly worked as a substitute teacher (“never to return,” she insisted vehemently.) Having been hired in what she thought would be a design position at Ethan Allen, she learned that she was actually just “selling couches.” Later she worked for a car dealership and then for an ad agency where “I cut out angels for snow globes and worked with used car salesmen—frightening!”

Eventually she was hired at join a design team at Opryland and eventually Gaylord Hotels. “I learned that you have meetings to plan meetings for the meetings, but I also learned procedures for budgets and other important business knowledge I needed to learn. It was lots of fun to work with an unlimited budget,” she avowed.

When her first child was born and she was on maternity leave, she received a call from a former teacher who was then head of Clarksville Academy and needed a postcard to advertise the school. “I worked so hard on this. I gave her 15 ideas and wouldn’t take any money for the project because I was so excited.” Eventually her pediatrician needed her to work on a project and from there, she began to get other clients by referral. “I was working all day for Gaylord and all night for me,” she admitted.

When her second son was born, she decided to take a leap of faith and work only for herself from home. Ms. Rager converted her dining table into her “office under construction” and sometimes met clients at Starbucks as her “office was being built.” She kept looking at the building where Joy’s Jewelers had formerly been located and eventually took the leap into having her own business location.

“My mentors are what help me. I went back to APSU and got my first intern and later a second. Both then became full time employees. Another woman, a former newspaper employee, joined the firm.” Within four years of opening her business, she has five employees working for her and business is “exploding.” Called Thrive Creative Group, the graphics firm can now pick and choose its clients after scrutiny of whether personalities will work well together.

“Thank goodness for my mentors,” she said. “I’ll call up and say, ‘I just got this in the mail. What do I do?’ I’m no speller and math is not my specialty. I find the business side of things terrifying, but I have the creative side down. After a couple of small business loans as startup capital, Ms. Rager said, “I’m still terrified to pay myself. I’d rather put the money back in the business.”

Thandiwe Shiphrah, a performance poet from Nashville, ended the day with an exciting recitation of her poetry. Entering the stage by singing, “We are walkers,” she mesmerized the audience with her rich voice and favorite poems. One described seeing a parade of ladies wearing hats as they walked to church. The poet imagines herself as wearing hats too when “I get older and wiser.”

She is described on www.awpwriter.org [2] as “author of a full-length poetry collection, Leftover Light: Poems, and the chapbook Treble Clef(t). A poet and performance artist, she has been invited to read and perform her work in a variety of venues around the United States, frequently collaborating with her husband, musician/composer Daniel Arite in a poetry and music duo known as The Bosch Institute. … [Her] poems appear in journals, magazines, and in the anthologies Beyond the Frontier: African-American Poetry for the 21st Century, Cabin Fever: Poets at Joaquin Miller’s Cabin, you say. say, and Fast-Talk Full Volume: An Anthology of Contemporary African-American Poetry.”

The Power of Women event was sponsored by: Legends Bank and Clarksville Pediatric Dentistry.