Nashville, TN – The Nashville Sounds are excited to kick off our 35thAnniversary season at Greer Stadium this Friday, April 13th with an eight-game homestand against the New Orleans Zephyrs and Oklahoma City RedHawks. The promotion-packed homestand will be highlighted by new family-friendly promotions and returning fan-favorites from 2011.

Nashville mayor Karl Dean will throw the season-opening ceremonial first pitch and American country music singer and Sarah Darling will perform the national anthem prior to Friday’s 7:05 p.m. home opener against New Orleans, the Triple-A affiliate of the Miami Marlins. TNA Wrestling Superstar Jeff Hardy will make an appearance to throw out a ceremonial first pitch. 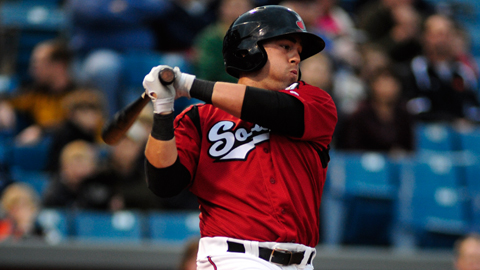 The first 2,500 fans through the turnstiles on Opening Night will receive a free Sounds magnet schedule, courtesy of Bargain Hunt Superstores. The first fireworks show of the year will immediately follow the game. Gates open at 6:05 p.m.

Adding to the excitement of the homestand, Saturday’s 6:35pm contest with New Orleans will end with a bang, as another postgame fireworks show lights up the sky following the action on the field, courtesy of Nashville’s NEWS 2. The first 2,500 fans through the turnstiles will receive a free Sounds magnet schedule, courtesy of Bargain Hunt Superstores. TNA Wrestling Superstar and Franklin native James Storm will make an appearance to throw out a ceremonial first pitch. Gates open at 5:35pm.

The first day game of the season will take place on Sunday afternoon with a 2:05pm contest with the Zephyrs. A new family-friendly promotion will debut in 2012 – Faith & Family Sundays. Fans receive half off of reserved or general admission tickets when a church or community bulletin is displayed at the box office. Limit eight tickets per bulletin and only redeemable on the day of game.

Sounds mascot Ozzie will also celebrate his birthday with a bash on Sunday, featuring several of his local mascot friends in attendance as part of the celebration. It will be the first of many weekly Ozzie’s Kids Club games, the ultimate fan club for kids 12 and under. Gates open at 1:05pm.

Monday’s series finale with New Orleans will begin at 7:05pm and will be the first of many Dollar Hot Dog Nights, when hot dogs continue to be $1.00 at concession stands all night long.

The Oklahoma City RedHawks (Astros affiliate) come to Music City for the 7:05pm opener of a four-game series on Tuesday evening. It will be the inaugural Tornados Tuesday 2-For-1 Tickets, when fans can bring a receipt with proof of Tornado snack food purchase to the Sounds box office and receive two tickets for the price of one.

The first Education Day game of the season will take place on Wednesday morning with an 11:05am contest versus the visiting RedHawks. Students in attendance will have the opportunity to participate in a pregame parade with Ozzie and receive an Education Day workbook presented by the Nashville Sounds Foundation. #WebWednesday will debut as a new promotion in 2012, offering Sounds email newsletter subscribers and social media followers the “Steal Of The Week,” including cool prizes, special offers, and ticket discounts at Greer Stadium for Wednesday games. Gates open a half-hour earlier than normal at 9:35am.

The Sounds conclude their eight-game homestand with another fireworks extravaganza on Friday evening. It should be another exciting night at the ballpark because of Reading Club Night. With nearly 65,000 students from over 225 different schools enrolled in the program, thousands of local kids will be in attendance. As with all Reading Club games, students will have the chance to participate in an on-field, pre-game parade with Ozzie, while also being eligible to win prizes for reaching “home plate” in the program. A collection drive will be held at the ballpark for Nashville RBI, as fans are invited to being new and used equipment. Game time at 7:05pm and gates open at 6:05pm.

Individual and season tickets, as well as group packages, are currently on sale. Call 615.690.HITS or visit the Sounds’ website at www.nashvillesounds.com/tickets [1] to order or for more information.