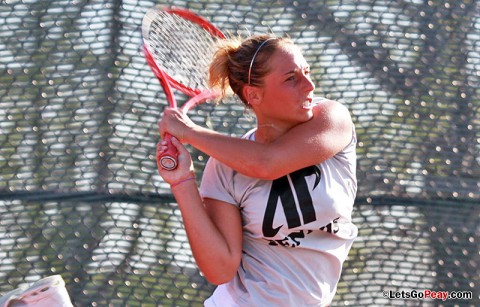 Austin Peay enters the weekend with a 5-2 OVC mark, sitting fourth in the standings behind Eastern Kentucky (7-0) and UT Martin (6-1). Morehead State is sixth, slated to the be the last team in the OVC Tournament, which starts next week.

“We have to get four players going at the same time,” head coach Malik Tabet said. “As far as the tournament goes, we can’t worry about seeding or anything like that. We have to play well, take each opponent and each match as it comes, and it will work itself out.”

The Lady Govs swept OVC matches last weekend against Tennessee State and Jacksonville State, with sophomore Andra Cornea being named the OVC’s Player of the Week. Cornea proved to be a vital part of the Lady Govs lineup, winning matches at Nos. 3 and 4 singles and both matches at No. 2 doubles. Freshman Ornella Di Salvo has anchored the APSU lineup at No. 2 singles, while fellow freshman Alison Carre has a perfect 7-0 league mark.

It also will be the final regular-season matches for Lady Govs standout senior Vanja Tomic at No. 1 singles. Tomic has a 17-match win streak on the line when she faces Eastern Kentucky’s Amandine Faouzi. Tomic has been flawless in OVC play this season, sporting an unbeaten 6-0 mark.

“This is a big match for Vanja,” Tabet said. “She’s played very well up to this point, but she really can’t overlook anyone. She’s going to have to stay focused on the task at hand.”

Eastern Kentucky has posted similar results to the Lady Govs, the only difference being better play at the bottom of the lineup. The Lady Colonels are coming off a 4-3 win against UT Martin and a 5-2 win against Murray State. Faouzi is 7-1 at No. 1 singles, while Kristina Labeja is 7-0 at No. 2. EKU has an overall 33-8 record at Nos. 5 and 6 singles.