[1]Clarksville, TN – On April 12th, 2012 around 10:00am Steve West of Springfield Tennessee was driving a Recreational Vehicle south on International Boulevard when it burst into flames. He safely exited the vehicle and contacted emergency services.

Saint Bethlehem Volunteer Fire Department responded and began to attack the fire which was at that time fully engaged; the column of smoke could be seen from several miles away. Montgomery County EMS unit Medic 22 also dispatched to provide medical assistance if it was needed. Montgomery County Sheriff Deputies Sgt. Jimmy Brown and Lt. John Smith arrived and together secured both of the roads leading to the scene.

When they realized that the fire was larger than they were prepared to handle by themselves, they requested Mutual Aid from Clarksville Fire Rescue (CFR).

CFR Engine 90 commanded by Lt Daniel Moore arrived at the fire scene at 10:14am; he surveyed the situation before taking command. “The RV was on the shoulder of the roadway, and was fully involved in fire. The St. B. Firefighters were on scene and had already initiated a fire attack…”

At this time the Saint Bethlehem firefighters relinquished their 1-3/4″ hose to Firefighter Andrew Arms. As EMC/Firefighter Tom Ford from Engine 90 established another 1-3/4″ line which also delivered potent fire suppression foam in addition to water.

A short time later, CFR Chief Michael Wall arrived on scene and assumed the overall command of the units fighting the fire. 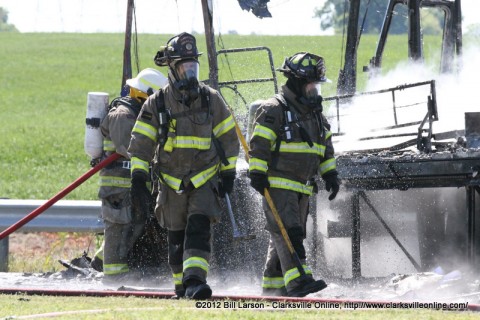 When Engine 90’s internal supply of water was almost exhausted, the decision was made to disconnect its line and relocate the engine to a fire plug that was closer to the fire scene. When the engines hose was reconnected it rejoined the fight The Saint Bethlehem Firefighters now rested and properly equipped were directed back into the fight.

A firefighter inspects the burned out husk of the RV

Once the flames were extinguished, the firefighters overhauled the scene to ensure that it would not reignite, before being released back to their stations by 11:23am. The Recreational Vehicle which was valued at $40,000 was totally destroyed.