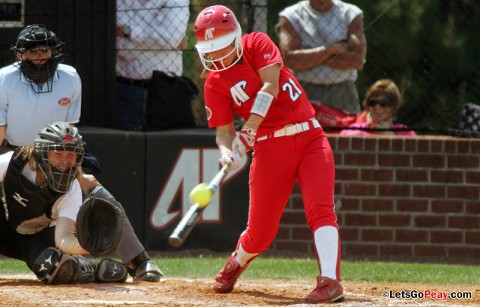 Austin Peay (12-24, 6-14 OVC) would force extra innings by tying the game in the bottom of the seventh on a two-out RBI single by freshman Paige Neely – driving in sophomore Lauren de Castro.

But the Redhawks Shelby Stein drew a leadoff walk from junior pitcher Morgan Brewer, in the top of the eighth inning, to put the go-ahead run on base.

Evan Sallis would move her into scoring position at second base with a sacrifice, with Leah Becker following with a single up the middle to drive in Stein with the go head run.

Redhawks (18-24, 9-12 OVC) starter Alora Marble made the run stand up in the bottom of the inning, retiring the Lady Govs in order for the win.

The Lady Govs had trailed 4-1 as late as the bottom of the fifth inning, when they cut the deficit to one run by scoring twice in the inning.

The first run came by way of freshman Sarah Rasmussen’s first home run of the season to lead off the inning, while the second run came in on two-out single by Neely – scoring sophomore Kayla Davidson, who reached on a single, to make it 4-3.

The Redhawks had jumped up to a 3-0 lead, after the first two and a half innings, with Simone Patterson driving in one run in the top of the second, while the other came in off a throwing error by Austin Peay.

The third SEMO run came in off a RBI single by Renee Kertz in the top of the third inning.

Austin Peay responded with a run in the bottom of the third inning on de Castro’s double, which scored Rasmussen – who got on with a base hit.

Southeast Missouri answered right back with a run in the top of the fourth inning on a sacrifice fly by pinch hitter Brittany Smith.

Neely and de Castro finished the opener for Austin Peay with three hits each, while Rasmussen and Davidson recorded two hits each.

Sallis led SEMO with three hits, while Cheyenne Gipson, Kertz and Patterson had two hits each.

Things started off much better for Austin Peay in Game 2, as the Lady Govs scored twice in the opening frame to take its first lead of the day.

Neely drove in de Castro with the first run on a sacrifice fly to left field, while Brewer drove in senior Amy Mills with a single for the second run.

The score would remain that way until the top of the third inning, when SEMO put together five hits – along with one Lady Govs error – to score three runs to take the lead for good, 3-2.

Kertz drove in the first two with a single, while Taylor Cowan had the other third-inning RBI.

The Redhawks would tack on two more runs in the top of the sixth inning, including a RBI by Sallis to go up 5-2, before Austin Peay scored its final run of the game on Davidson’s fourth home run of the season in the bottom of the inning.

SEMO would add two more insurance runs in the top of the seventh inning on Xia Wilson’s two-run homer for the 7-3 final.

Brewer would lead the Lady Govs with two hits, while Sallis and Patterson had three hits each to lead the Redhawks.