Clarksville, TN – At 2:00pm Today the Roxy Regional Theatre is presenting the second to last showing of Schoolhouse Rock Live! A live action musical that brings the entertaining and educational cartoons from Saturday Morning TV that we fell in love with as children back to life so that our own children can fall in love with them as well.

Whenever you can touch someone’s childhood memories in theatrical production, you are sure to have a hit on your hands; and  this is the case with this wonderful Roxy production. Kids and their parents will fall in love with the fast paced musical numbers in this show. 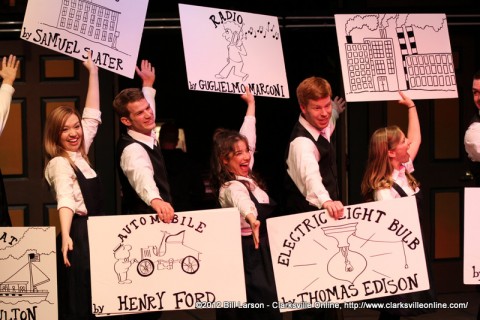 Necessity is the mother of invention!

Based on the Emmy Award-winning 1970’s Saturday morning cartoon series that taught history, grammar, math, science and politics through clever, tuneful songs is not only making a small-screen comeback, instructing a whole new generation to “Unpack Your Adjectives” and “Do The Circulations.”  Schoolhouse Rock originally ran on Saturday mornings on ABC from 1973 to 1985, and was later revived from 1993 to 1999.

Interest in Schoolhouse Rock is as strong as ever. A student at the University of Connecticut recently collected over 2,000 signatures from her peers, professors, and neighbors in an effort to convince ABC to return Schoolhouse Rock to the morning line up.

The original Schoolhouse Rock television series was the brainchild of advertising executive David McCall  who noticed his son could remember all the words to popular songs on the radio, but could not remember the multiplication tables. He reasoned that if important educational information was coupled with exciting animation and catchy music, children would be able to learn and remember it.

From this simple idea, Schoolhouse Rock was born and quickly adopted by ABC-TV which broadcast the series on Saturday mornings from 1973 to 1985. Twenty years, 41 songs, and four Emmy Awards later, those of us who grew up with “Multiplication Rock”, “America Rock”, “Science Rock” and “Grammar Rock” can still sing the “Preamble to the U.S. Constitution” and know that “and,” “but,” and “or” all belong in “Conjunction Junction”.

The Roxy Regional Theatre’s production is directed and choreographed by Tom Thayer, “Schoolhouse Rock Live” is sponsored in part through the generous support of Valerie Hunter-Kelly and the Air Assault Team of Keller Williams Realty, in addition to Hemlock Semiconductor Group.

In the dark we hear the sound of an alarm clock ringing and we are introduced to Tom, a young teacher preparing for his first day of school, standing in his bathrobe. As he rehearses what he will say, he hears the school bell and the sound of the children settling into their desks.

[2]One at a time we see Tom’s “other sides”, as they enter speaking his thoughts. We are introduced to George, the romantic side; Dori, the goofy side; Schulie, the sweet side; Joe, the cool side; and Dina, the mature side. They tell us his thoughts that range from “I love children” to “these monsters are going to eat me alive”.

Tom decides to try and watch some television while he settles down and collects his thoughts. When he turns on the TV we hear the theme to Schoolhouse Rock. The characters begin to sing one of the familiar songs that Tom instantly recognizes (Verb: That’s What’s Happening).As the songs goes on, Tom is swept up in the excitement and begins to sing and dance with the others.

[3]As the music ends, he is startled to find himself standing with a group of strange people that he does not recognize. They explain to him that they represent all of the thoughts in his head.

They represent everywhere he has been, everyone he has known, and every person that he has ever met (A Noun Is A Person, Place Or Thing). They explain that they are there to help Tom remember that teaching is as easy as 1,2,3 (Three Is A Magic Number).

[4]Still thinking that all of this is a hallucination, he continues to try and get rid of the others. They explain to him that he needs them; and “necessity is the mother of invention” (Mother Necessity).

Tom is asked to remember why he wanted to be a teacher in the first place. He remembers that his grandmother and her mother before that were teachers. Teaching was one of the few opportunities for women to work at that time (Sufferin’ Till Suffrage).

[5]He also remembers working at his grandfather’s hardware store as a child and sneaking away on Saturday mornings to watch Schoolhouse Rock (Lolly, Lolly, Lolly). After Schulie and company sing “Unpack Your Adjectives”, Tom reminds them that he not only has to teach grammar, but math, science, and social studies as well (Just A Bill / The Preamble).

Caught up in the moment, Tom remembers one very important thing; that learning should be fun (Ready Or Not, Here I Come).

[6]When the gang becomes exhausted from all of the excitement, Tom encourages them to stay active and to keep their blood moving (Do The Circulation). Joe then tells the group that he is ready to sing a song and will need the help of you, me, him, them, and her (Rufus Xavier Sarsaparilla).

Dori enters with Tom’s guitar and hands it to Schulie who says about her playing, “Oh … on a scale from one to ten, I’d give myself about an eight (Figure Eight). Schulie reminds Tom that “Figure Eight” was the way she had learned her eight multiplication tables.

Joe and Shulie enter in their leather jacket and poodle skirt and dance to George’s rock and roll physics lesson (A Victim Of Gravity). George and Schulie then join together to sing “Zero, My Hero” while the rest of the gang acts out their duet.

[7]Tom goes over all of the parts of speech that they have covered (adjectives, adverbs, pronouns, nouns, and verbs) and wonders what they have left out. Conjunctions! – and where do they come together – at the junction! (Conjunction Junction).

Joe reminds Tom that English will not be the first language of many of his students. School will be a very important transition to America for many of his students, just as America went through an important transition as it struggled to expand and continues to expand (Great American Melting Pot / Elbow Room / Interplanet Janet). Hey! Wow! The thought of going to the moon has the whole group energized, and what kind of word bets expresses that energy – “Interjections”.

Tom then thanks them all for helping him remember that learning can be fun. He asks them to stay around and listen to him do a song (The Tale Of Mr. Morton). As the song ends, all of the characters are gathered around Tom as if he were teaching. “Any questions, kids?”, he asks – and on the final beat we see Schulie’s hand go in the air.