Nashville, TN – Corey Patterson delivered a walk-off double in the bottom of the 11th inning to give the Nashville Sounds a 5-4 victory over the division-leading Omaha Storm Chasers on Wednesday afternoon at Greer Stadium.

With two outs, second baseman Eric Farris reached on an infield single and hurried around the bases as Patterson lined his second double of the game to the wall in right center for the club’s fourth straight victory. 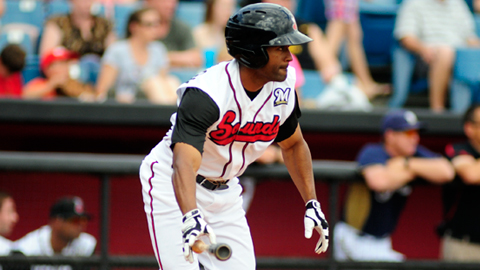 It was the league-leading fifth extra-inning contest for Nashville (8-17) and the club’s 25th contest decided by two runs or less (5-12).

Hot-hitting Brooks Conrad homered for the third straight game, which also extended his hitting streak to a team-high 10 games.

The Storm Chasers batted around and plated their first three runs in the opening frame against Nashville starter Brian Baker.

After Irving Falu tripled down the right field line, Johnny Giavotella crushed his fourth homer of the season to left for the first two runs. The Storm Chasers followed with three consecutive two-out singles, including David Lough’s RBI base hit to score Max Ramirez for the third. The Storm Chasers left the bases full as Baker struck out his final batter on his 36th pitch of the inning.

Omaha extended its lead to 4-0 in the top of the sixth. Former Sound Jason Bourgeois singled to left field, advanced to second on a sacrifice, and scored on a Giavotella RBI base hit to center.

The Sounds cut the lead in half at 4-2 in the bottom of the seventh as third baseman Taylor Green (2-for-4) and designated hitter Sean Halton started the frame with singles off reliever Sean O’ Sullivan.

Two batters later, Farris reached on an infield groundout to move Green to third and then moved to scoring position on a wild pitch. Both runners scored on a line drive double by Patterson, who has driven in four runs in his last two games.

Nashville knotted the game at 4-4 in the next inning against reliever Roman Colon. Outfielder Logan Schafer struck out but advanced to first base on a wild pitch, followed by a game-tying, opposite-field homer by Conrad. The two-run shot over the left field wall was Conrad’s fifth of the season and third in his last three games.

In his shortest start of the season, Baker pitched 2 2/3 innings and was charged with three runs on eight hits with three strike outs.

Johnnie Lowe picked up his first Triple-A win with a season-high four scoreless innings while extended his shutout streak to 8.0 innings this season.

The Storm Chasers stole four bags on the afternoon, the most this season against the Sounds, who came into the game ranked second in the PCL by throwing out 48% of runners.

The Sounds snapped their errorless streak at 43 innings with a fielding error by Conrad in the top of the fifth.

In his first start for the Storm Chasers this season after being optioned by the Royals, starting pitching Everett Teaford gave up three hits over 5 2/3 scoreless innings. Francisley Bueno (0-2 ) took the loss.

The Sounds and Storm Chasers will play the finale on a four-game series at 7:05pm CT on Taco Bell Throwback Thursday. Right-hander Mike Fiers (0-2, 4.63) will toe the rubber against left-hander Vin Mazzaro (0-0, 5.14).

Two out when winning run scored.