Half of the Company came home on this flight, while the other half is currently assigned to additional duties in Afghanistan, and will be returning home in a few weeks. This company has been in all three major areas of operation including Iraq, Kuwait, and Afghanistan.

The soldiers had been serving as part of the Redistribution Property Assistance Teams which were responsible for closing out the U.S. Bases in Iraq and processing all the U.S. Government equipment that had been left behind as U.S. troops withdrew from that country on December 18th, 2011. The unit’s mission at was to take equipment that had left behind at bases across Iraq, seperate the good from the bad; send the good on to Afghanistan; and the bad back to the United States to get re-manufactured, or auctioned off.

“The amount of equipment these soldiers were accountable for can run into the millions of dollars in value, and by processing and reusing it these soldiers saved the U.S. Taxpayers a lot of money. Mission capable equipment that we are able to refurbish and reuse, doesn’t have to be replaced by the taxpayers,” said 101st Sustainment Brigade Commander Col. Michael Peterman. “As we do reverse logistics as we are doing in Iraq and Afghanistan, the 227th Quartermaster Company had to take the equipment from the Brigade Combat Teams, figure out what it is, classify it based on the serviceability of it, and ship it to where it needs to go.”

The equipment they process is being transferred to other U.S. Army units, out of date equipment is being turned over to Foreign Military Sales for transfer to Iraq’s or Afghanistan’s national security forces, or if it is un-servicable then they will either get rid of it or sell it off as scrap.

Staff Sgt. Gene Taylor from the 227th Quartermaster Company, in a previous news story discussed their mission in detail “Units turned in all their non-rolling stock and their rolling stock then we processed all the non-rolling stock at Contingency Operating Base Adder in Iraq,” he said. “My guys here got everything together, banded and boxed it up, then shipped it to where it needs to go so we could get it out of the country.”

Rolling stock consists of all military vehicles, Taylor said, while non-rolling stock includes all other equipment. “The pallets include radios, computer equipment and hospital equipment, It’s mainly stuff that the units can’t take back with them,” added Pfc. Tye Spinks in the same story.

“Captain LaShell Davis and her First sergeant Shawn Hobbs have both done an outstanding job for our country. You want to talk about a challenge Capt.Davis had soldiers in Iraq, Kuwait, and Afghanistan; and she has served under 5 different bosses since she deployed last year,” said Col. Peterman. “The 227th Quartermaster Company has touched equipment belonging to every Brigade Combat Team coming out of Iraq, and now they are starting to touch more coming out of Afghanistan. These soldiers are resetting our combat power for the next fight, and they have done a great job. We are incredibly happy to get them home.”

Family and friends of the returning soldiers had gathered together to give their loved ones a proper welcome home. This was to be an afternoon flight with simply beautiful weather, after a wet and rainy morning.

15 minutes before the flight arrived the family members were allowed to proceed outdoors to wait on for a chance to see the flight bearing their loved ones arrive. 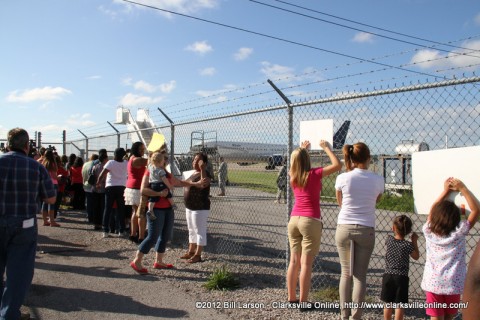 The flight touched down around 4:59pm to the cheers of the soldier’s loved ones. After landing the plane taxied to the disembarking point, where the passenger boarding stairs were moved in position. Cheers rose again when the door to the plane opened; and again when the first soldiers appeared in the door. After deplaning as the soldiers walked slowly to the terminal; every soldier’s eyes were focused on the crowd searching for their loved ones. The crowd was doing the same, and as those in the crowd spotted their soldier, they shouted out his or her name to attract their attention.

Solider Nicholas Saunders was waiting with a big smile on his face and an arm full of roses for his girlfriend Spc. Jessica Blackmon to return home. He said they had no current plans but simply wanted to, “Enjoy being close to each other.”

When the soldiers had passed, the families returned into the terminal to take part in the short ceremony that was all that stood between them and their loved ones.

The soldiers drop off their weapons, then the Ceremony officially begins as the soldiers march into the facility as those in the crowd cheer wildly for them.

There is a brief ceremony consisting of a short prayer of thanks for their return, followed by remarks which this evening were given by 101st Airborne Division Commander Maj. Gen. James C. McConville. He thanks the soldiers for the success of their mission in Afghanistan, the families for their sacrifices during the last year.

At the conclusion of the ceremony, the Soldiers are given 20 minutes of family time which enables them to begin the reunification process with their families. It’s quite a sight to see as these brave warriors rock hard demeanor melt when they hold their children, and kiss their mothers, wives, or girlfriends for the first time in a year. Believe me, there is never a dry eye in the house.

After the visitation time is over the soldiers formed back up, the soldiers marched from the terminal and board buses to go to their unit to turn in weapons and other sensitive items before they are released to be with their families.

The soldier’s families are then given a short brief on reintegration issues, and then return to their vehicles  to go pick up their loved ones once their turn-in was complete.