The Wallace Award, sponsored by Mizuno, recognizes the nation’s top shortstop and will be presented on June 30th in Lubbock, Texas, as part of the College Baseball Hall of Fame’s Night of Champions. 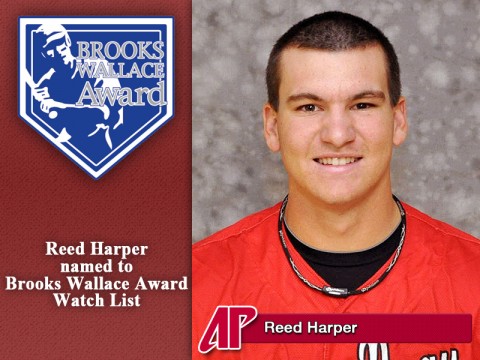 Harper, a junior from Clarksville, Tennessee (Clarksville High School), was one of three players from the Ohio Valley Conference named to the first watch list. He was joined by Southeast Missouri’s Kenton Parmley and Eastern Kentucky’s Richie Rodriguez.

Harper has started every game of his career (154 games) entering this weekend’s series at SIU Edwardsville. After getting the 2012 campaign off to a slow start, he recorded a hit in 22 of 24 games from March 17th-April 27th – including hit streaks of eight and nine games – and is batting .328 entering the weekend with 12 doubles and three home runs.

“Of course, we look at all the statistics — batting average, double, triples, home run, etc. — when developing our watch lists, but for a shortstop award, fielding percentage has to be of huge importance,” said Kevin Dunagan, Wallace Award co-chair. “Each of these young men has compiled statistics that justify their place on this list.”