HomeNewsClarksville Police Department reports a Man Attempted to Rob a Store with...
News

Clarksville, TN – On May 12th, 2012, around 9:00pm, Clarksville Police responded to a robbery at a business on the 2700 Block of Wilma Rudolph Boulevard in which a man had a gun and was fighting with the store manager outside.

When officers arrived, the store employees had already wrestled the gun away from the man and had him pinned on the ground, holding him for Police. 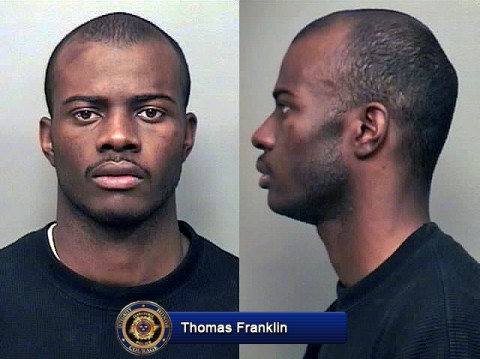 When officers took the man, later identified as Thomas Lee Franklin, into custody, they noticed a package resembling an explosive device on the sidewalk in front of the business.

The investigation revealed that Franklin had approached the store manager outside of the store, lifted his shirt to show a handgun, and gave him a note demanding money. The manager and suspect then engaged in a physical confrontation, and then other employees jumped in to disarm the man until Police arrived.