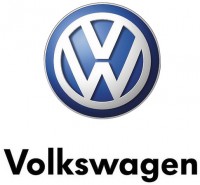 Chattanooga, TN — Volkswagen Chattanooga has achieved another significant production milestone – the completion of its 100,000th Passat, just nine months after the car went on sale in the U.S. The milestone Passat was handed over to its new owner in a ceremony held today with hundreds of Volkswagen employees at the Chattanooga factory.

The Passat was driven off the line by employees from the factory and into the Conference Center where an all-employee meeting was being held this morning. The keys were then handed to Volkswagen Chattanooga CEO and Chairman Frank Fischer who presented them to owner Joanne Benante, who had come from Atlanta, Georgia, to take delivery at the factory. To the cheers of the employees, she then drove her new car through the middle of the gathering and out the front doors on her way back to I-75 and south to Atlanta.

“We have built each and every one of those 100,000 Passats with a passion for detail that sets the standard for safety and reliability for the mid-size sedan market,” Fischer said. “I’m so proud of our team for reaching this milestone so quickly while maintaining the superior quality that earned the Passat the Motor Trend 2012 Car of the Year award,” Fischer said.

“Producing 100,000 Passats so soon after the vehicle went on sale in September 2011 is a testament to all the hard work that has gone into making our LEED-certified Chattanooga plant and the Passat such a success, both here and abroad,” said Jonathan Browning, President and CEO, Volkswagen of America. “It is further evidence that our momentum in the U.S. market is continuing and we are appreciative of our growing customer base, which has been drawn to the Passat’s outstanding fuel economy, German engineering and value,” Browning said.

Volkswagen has invested $1 billion in the local economy for the Chattanooga plant and created more than 2,200 direct jobs in the region. According to independent studies, the new Volkswagen plant is expected to generate $12 billion in income growth and an additional 9,500 jobs related to the project.

The facility manufactures the all-new 2012 Passat sedan, specially designed for the North American market and winner of the Motor Trend magazine 2012 Car of the Year award, Kelly Blue Books Family Car of the Year and Cars.com Best of 2012 award.