Pasadena, CA – Ah, June. It marks the end of school, the start of summer…and the official start of the 2012 Atlantic hurricane season, which got off to an early start in May with the formation of Tropical Storms Alberto and Beryl. National Oceanic and Atmospheric Administration forecasters are calling for a near-normal hurricane season this year.

But whether the season turns out to be wild or wimpy, understanding what makes these ferocious storms form and rapidly intensify is a continuing area of scientific research, and is the focus of the NASA-led Hurricane and Severe Storm Sentinel (HS3) airborne mission that kicks off this summer. 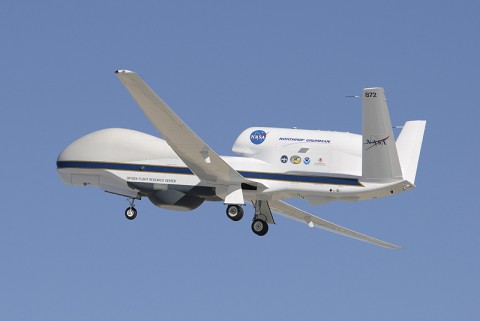 NASA's Global Hawk soars aloft from Edwards Air Force Base, Calif. The NASA Global Hawk is well-suited for hurricane investigations because it can over-fly hurricanes at altitudes greater than 60,000 feet with flight durations of up to 28 hours - something piloted aircraft would find nearly impossible to do. (Credit: NASA/Tony Landis)

Beginning in late August through early October and continuing for the next several years during the Atlantic hurricane season, NASA will dispatch two unmanned aircraft equipped with specialized instruments high above tropical cyclones in the Atlantic Ocean basin. These “severe storm sentinels” will investigate the processes that underlie hurricane formation and intensity change. NASA’s Jet Propulsion Laboratory in Pasadena, CA, will join several other NASA centers and numerous federal and university partners in the HS3 mission.

The autonomously-flown NASA Global Hawk aircraft are well-suited for hurricane investigations. They can over-fly hurricanes at altitudes greater than 18,300 meters (60,000 feet), and fly up to 28 hours at a time — something piloted aircraft would find nearly impossible to do. Global Hawks were used in the agency’s 2010 Genesis and Rapid Intensification Processes (GRIP) hurricane mission and the Global Hawk Pacific (GloPac) environmental science mission. The Global Hawks will deploy from NASA’s Wallops Flight Facility in Virginia and are based at NASA’s Dryden Flight Research Center on Edwards Air Force Base, Calif.

“Hurricane intensity can be very hard to predict because of an insufficient understanding of how clouds and wind patterns within a storm interact with the storm’s environment,” said Scott Braun, HS3 mission principal investigator and research meteorologist at NASA’s Goddard Space Flight Center in Greenbelt, MD “HS3 seeks to improve our understanding of these processes by taking advantage of the surveillance capabilities of the Global Hawk along with measurements from a suite of advanced instruments.

“One aircraft will sample the environment of storms while the other will measure eyewall and rainband winds and precipitation,” Braun continued. HS3 will examine the large-scale environment that tropical storms form in and move through and how that environment affects the inner workings of the storms.

HS3 will address the controversial role of the hot, dry and dusty Saharan Air Layer in tropical storm formation and intensification. Past studies have suggested the layer can both favor and suppress intensification. In addition, HS3 will examine the extent to which deep convection in the inner-core region of storms is a key driver of intensity change or just a response to storms finding favorable sources of energy.

JPL’s High-Altitude Monolithic Microwave Integrated Circuit Sounding Radiometer (HAMSR) microwave sounder instrument will be one of a set of instruments aboard the Global Hawk that will focus on the inner region of the storms. Most of these instruments represent advanced technology developed by NASA that in some cases are precursors to sensors planned for future NASA satellite missions.

HAMSR, an advanced water vapor sensor, analyzes the heat radiation emitted by oxygen and water molecules in the atmosphere to determine their density and temperature. The instrument operates at microwave frequencies that can penetrate clouds, enabling it to determine temperature, humidity and cloud structure under all weather conditions. This capability is critical for studying atmospheric processes associated with bad weather, like the conditions present during hurricanes.

For more on NASA’s Global Hawks: