Nashville, TN – The Nashville Sounds split a doubleheader with the division-rival Omaha Storm Chasers on Saturday evening at Greer Stadium, losing the opener, 8-0, and winning the nightcap, 10-3.

Nashville batted around and exploded for seven runs in the bottom of the sixth inning to take a 10-3 win over the Omaha Storm Chasers in the nightcap of the doubleheader. 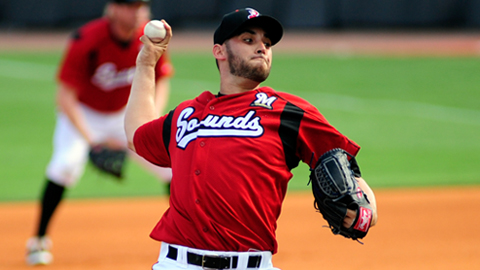 The seven runs scored in the inning set a season-high for the Sounds while the 10-spot matched a season-high previously set on June 11th at Memphis.

Prior to the contest, the Sounds had only scored 18 total runs in the sixth inning all season.

Travis Ishikawa (left oblique strain) made his first rehabilitation appearance for Nashville and went 2-for-4 with a double and three RBIs as the team’s designated hitter.

Nashville starter Mark Rogers recorded a no-decision, giving up three runs (two earned) on four hits and four walks in five innings of work for a no-decision. The 26-year-old also matched a season-high with six strikeouts with 101 pitches (56 strikes).

Reliever Mike McClendon (3-3) closed the door with two scoreless frames and the victory.

Jordan Brown led off the bottom of the eighth inning with a single and was replaced by pinch runner Corey Patterson. Reliever Jeremy Jeffress then threw 10 straight balls, including a wild pitch that allowed Patterson to score the go-ahead run from third. After another walk to load the bases, shortstop Hainley Statia knocked a weak grounder past the shortstop to score Sean Halton.

After a Logan Schafer sacrifice fly and Bianchi single, Ishikawa crushed a three-run double to right –center to clear the bases. The final run of the frame came from an RBI double from Patterson.

The two teams traded runs through the first five innings, beginning with Omaha in the top of the first. Kansas City Royals’ prospect Wil Myers worked a two-out walk and came home to score the game’s first run on the next play on a two-base fielding error on Brown.

The Sounds knotted the contest at 1-1 in the bottom of the second and only managed to score one run. With no outs and the bases loaded, catcher Jason Jaramillo grounded into a double play that scored Brown.

In the next inning, Myers uncorked his 11th homer of the season over the right field wall to give the Storm Chasers a 2-1 lead.

Nashville again tied the game at 2-2 in the home half of the third. Schafer blooped a double over the third baseman’s head and scored two batters later on an Andy Gonzalez sacrifice fly.

Gibbons gave the Sounds a 3-2 lead in the bottom of the fourth with a towering homer onto Chestnut Street. The long ball was Gibbons’ third in his last five games.

Omaha came back to score a run in the top of the fifth to knot the game at 3-3. Irving Falu worked a four-pitch walk, stole second base, and came home to score the tying-run on a Clint Robinson RBI single.

Omaha starter Will Smith (1-4) took the loss after scattering eight hits for four runs in five plus innings.

In the opener, a trio of Omaha hurlers combined on a three-hitter as the division-leading Storm Chasers hung an 8-0 defeat on the Nashville Sounds in the opener of a doubleheader on Saturday evening at Greer Stadium.

Francisley Bueno worked a perfect sixth before Brandon Sisk closed out the contest with 1-2-3 seventh.

The Omaha pitchers combined to retire the final 15 Nashville batters in succession.

The loss was the sixth shutout suffered by Nashville (26-43) this season. Jeff Bianchi, Andy Gonzalez, and Dayton Buller each singled to account for the Sounds’ lone hits in the game.

Right-hander Marco Estrada made his first rehab start for the Sounds as he recovers from a right quadriceps strain. He allowed one hit over three scoreless frames, walking four batters and striking out two. He threw 59 pitches (34 for strikes) and took a no-decision.

The visitors broke a scoreless deadlock in the fourth when Omaha third baseman Irving Falu belted a three-run home run off Sounds reliever Victor Garate (2-4) with two outs. David Lough (single) and Derrick Robinson (walk) both scored on the blast, Falu’s fifth roundtripper of the year.

The Storm Chasers wrapped up the contest’s scoring with a five-run seventh against Sounds right-hander Brian Baker.

After Wil Myers opened the frame with a walk, designated hitter Clint Robinson upped the visitors’ lead to 5-0 when he crushed a two-run homer to right, the slugger’s ninth longball of the season.

Omaha continued the rally by loading the bases on a pair of single followed by a fielding error by Sounds second baseman Eric Farris before Derrick Robinson plated the frame’s third run with an RBI single to left, which chased Baker from the contest.

Johnnie Lowe took over and walked each of the first two batters he faced to force in two more runs to bring the score to its final 8-0 standing.

Cesar Izturis (strained left hamstring) also made his first rehabilitation appearance for Nashville and went 0-for-3 with three groundouts as the team’s designated hitter.

The teams wrap up the series with a 2:05pm matinee finale on Sunday afternoon. It will be a battle of organizational top prospects as right-hander Wily Peralta (1-8, 6.34) mans the bump for the Sounds to face Omaha southpaw Mike Montgomery (3-2, 4.81).