Nashville, TN – Nashville Sounds right-hander Seth McClung worked his team-leading sixth quality start and Eric Farris belted his first home run of the year to lead the Sounds to a 4-3 win over division-rival Iowa Cubs on a sweltering Saturday evening at Greer Stadium, where game time temperature was 104 degrees.

With the victory, Nashville (34-49) pulled even with Iowa into a second-place tie in the PCL American Conference Northern Division, the Sounds’ highest point in the standings all season. Both clubs trail first-place Omaha Storm Chasers by 17.5 games, however.

The win was Nashville’s league-leading 18th one-run victory of the season. 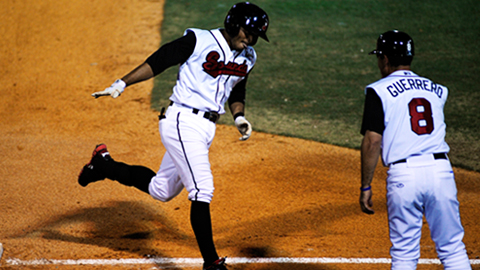 Nashville held a comfortable 4-0 lead entering the ninth, but Iowa made a game of it with a pair of late homers off Rob Wooten before Mike McClendon closed out the victory.

The Sounds broke a scoreless tie in the bottom of the fifth when McClung was hit by a Brooks Raley pitch to open the inning then lumbered around to score when Jeff Bianchi followed with a double to the wall in left-center. The red-hot Bianchi went 3-for-4 on the night, his sixth multi-hit effort in his last 10 games.

Nashville missed an opportunity to extend the advantage later in the frame. With runners on second and third and one out, Jordan Brown struck out and Raley induced an inning-ending popout from Andy Gonzalez to escape the jam with only a 1-0 deficit.

Farris doubled the Sounds’ lead to 2-0 in the sixth when he smashed a one-out solo homer to left off Iowa reliever Ryan Rowland-Smith, the infielder’s first longball in 364 at-bats.

Nashville extended the lead to 3-0 later in the inning when Corey Patterson (2-for-4) reached on an infield single, moved to second on a passed ball, stole third, and scored on a wild pitch.

The Sounds loaded the bases with no outs against Mike MacDougal in the seventh but only managed to get one run across the plate in the frame. With the sacks full, Jay Gibbons ripped an RBI single to right to plate Jason Jaramillo, who had drawn an inning-opening walk. Farris followed with a grounder to second that resulted in a forceout at the plate for the first out. After Jeff Beliveau relieved MacDougal, the left-hander struck out Patterson and retired pinch-hitter Edwin Maysonet to leave the bags jammed.

After Juan Perez blanked Iowa in the seventh, Donovan Hand closed out his scoreless month of June with a perfect eighth for the Sounds. The right-hander worked 17.0 scoreless innings in his nine appearances in the month for Nashville.

Iowa finally got onto the scoreboard in the ninth against Wooten. After Dave Sappelt reached on a one-out throwing error by Gonzalez at third base, I-Cubs first baseman Blake Lalli belted a two-run homer to right, his sixth roundtripper of the year. Following a strikeout of pinch-hitter Matt Tolbert, Wooten served up an opposite-field solo homer to Brett Jackson that drew the visitors within a run at 4-3.

McClendon took over on the hill for the Sounds and issued a walk to Alfredo Amezaga before inducing a game-ending groundout from Adrian Cardenas to earn his fifth save of the year.

Raley (4-3) absorbed the loss for the I-Cubs after allowing one run on four hits over five innings of work.

The teams continue the series with another 6:35pm matchup on Sunday evening. Right-hander Claudio Vargas (2-1, 5.25) will make the start for the Sounds and face former Nashville hurler Frankie De La Cruz (1-3, 2.90).