Clarksville, TN – Harvard-educated Alice Randall is as close to being a Renaissance woman as you’re going to meet on the streets of Nashville. Writer-in-residence for Vanderbilt University, she is the author of The Wind Done Gone, Pushkin and the Queen of Spades, Rebel Yell and her latest book, Ada’s Rules. The first African-American woman to write a number one country song, she also wrote a video of the year, worked on multiple Johnny Cash videos, and produced a pilot for a prime time drama on CBS (featuring ex-wives of country stars).

Ada’s Rules hits head on what Alice Randall feels is the dominant civil rights issue of the first quarter of the 21st century—health disparity, specifically the issue of being overweight that leads to diabetes in one in four African-American women over 55. Diabetes leads to many women suffering amputation and/or kidney failure. Alice Randall is on a crusade to help women recognize this problem and find ways to overcome it. 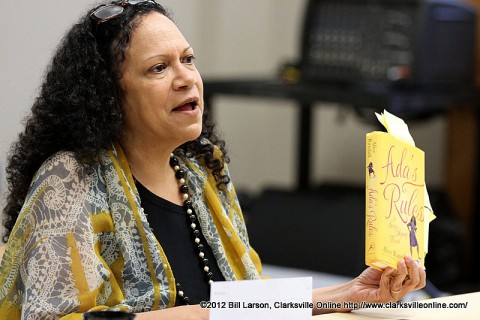 Ada’s Rules is a novel that helps the reader learn about the life of Ada Howard, the wife of the pastor of Nashville’s Full Love Gospel Tabernacle. Ada receives an invitation to her 25th class reunion and is then shocked to learn that she’s eaten her way to 220 pounds. Deciding that she will lose 100 pounds in the next year, she writes a list of 53 rules beginning with “Don’t keep doing what you’ve always been doing!”

Alice Randall is a master storyteller with myriad characters who surprise at every turn. Ada suspects that her husband, Lucius “Preach” Howard, has found a girlfriend. He’s lost weight, cut his hair and has bought himself a new car. On top of that, he stays away from home quite a bit and now says he needs to install a shower in his office. Preach and Ada have no sex life and Ada sets out on a mission to correct that problem by “bringing her husband back to the table of her body.”

Alice spoke to the writers at the Eighth Annual Clarksville Writers’ Conference through reading passages from her writing and discussing how she arrived at them. Her background ranges from completing an independent study with Julia Child (and consequently teaching classes on Soul Food in addition to those on American Culture and Creative Writing) to founding midsummer Music to fund novel writing and a community of powerful storytellers in Nashville after her graduation from Harvard.

Most important, Alice Randall believes that motherhood is the most creative of callings. She is a sensitive, caring human being who devotes herself to lifting up the human race through philanthropy in many areas. With her attorney husband, David Ewing, she lives in Nashville but speaks throughout the United States. Their daughter, Caroline Williams, also a Harvard graduate, teaches and writes in the Mississippi Delta.

Alice Randall has been most generous in giving her time and talents to Clarksville Writers’ Conference and served as the keynote speaker in 2010. Her “How to Borrow from Genre Fiction to Enhance Your Literary Fiction” and “Uses and Mis-Uses of Autobiography When Writing Fiction” were highlights of the 2012 conference; her readings from those speeches are available on video accompanying this article.

Don’t miss the writing of Alice Randall; her creative energy translated into the fictional character of Ada Howard just might inspire you to save your own life.