Stephanie Paris, who was a star second baseman for UT Martin in the early 2000s before becoming a successful high school and college coach, has been hired as Austin Peay’s seventh head coach. She replaces Casey Dickson, whose contract was not renewed in the spring after four seasons. 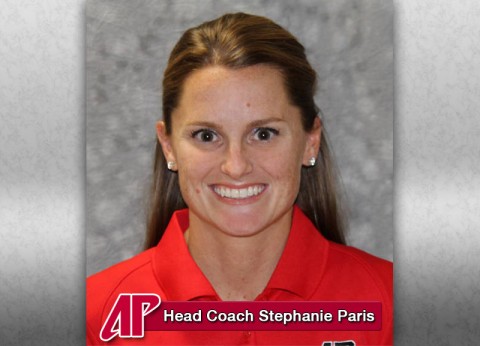 “Obviously I am super excited about this job,” Paris said. “To be back in Middle Tennessee and the opportunity to be a head coach in the conference that I played in is so exciting. I am so ready to get going, get out on the field right now.”

“I think she is going to be a great fit for us,” APSU Assistant Athletics Director Cheryl Holt said. “Stephanie is just so positive, brings so much energy to the program—she just has so much passion for the sport.  She has proven she can build programs.”

Paris comes to Austin Peay from Colorado State University-Pueblo, where she has served as assistant coach since 2007. While at CSU-P, she has helped the ThunderWolves to five 20-plus winning seasons that saw them participate in the post-season conference tourney each season. It also included a No. 4 regional ranking this past season. CSU-P was the 2009 NCAA National Tourney regional runner up in 2009.

Jumping from a Division II assistant position to a Division I head coach is not something that fazes Paris.

“The ball game hasn’t changed from Division I to Division II—it is still the same ball game,” Paris said. “I am just excited to get started and see what kind of talent we have here, incorporate my philosophies and strategies and started a tradition of winning here.”

“Stephanie was ready for the next step,” Holt said. “’She was the guiding force behind that program—they were struggling before she got there. Stephanie literally had experience in doing it all there—from recruiting, paperwork, on-field coaching, strategies…”

Paris is used to building and rebuilding. The Brentwood native took over Ravenwood’s program at its inception in 2005 and led them to a 7-20 record. Ravenwood improved to 19-18 the following season and 33-17 in 2007.

In her short time there, Paris developed 10 all-district selections and one all-region product.

“Tennessee has a gigantic pool of talent,” Paris said. “The instate talent should be enough to compete in the conference and the national level. I expect to have some out-of-state kids who might be game changers or top-caliber kids.”

As a player, Paris played two seasons at Jackson State Community College where she was named the 2001 Tennessee Junior College Player of the Year and was later inducted into the Jackson State Athletics Hall of Fame. Paris owned a career .354 batting mark at the school.

From there she went to UT Martin where she set records for stolen bases and stolen-base attempted. She earned honorable mention All-OVC in 2003.

Paris signed her contract on Thursday and will be heading off to recruit this weekend. In addition, she will have the task of finding an assistant coach in what little spare time she might have over the next few weeks.