Highlighting the homestand’s worth of promotions will be three fireworks shows, the final two Trevecca Nazarene University FAITH NIGHTS® pregame concerts of the season, and “Double Plays for Down Syndrome Night” – a special evening for the Down Syndrome Association of Middle Tennessee and the Pujols Family Foundation at the ballpark during which the Sounds will wear special blue and yellow pinstriped jerseys on the field. 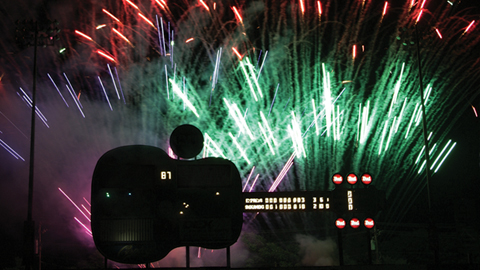 Postgame fireworks will light up the sky as the Sounds welcome the Salt Lake Bees to Nashville for the only time in 2012 for Friday’s homestand opener. Musical artist Bethel World Outreach will perform the first of two Trevecca Nazarene University FAITH NIGHTS® pregame concerts of the homestand on the plaza stage near the first-base entrance approximately one hour before a 7:05pm first pitch. Gates open a half-hour earlier than normal at 5:35pm.

Before Sunday’s game, a pre-game autograph session beginning at 5:55pm will take place on the field with members of the Sounds team and coaching staff for Autograph Day. The family-friendly Faith & Family Sunday will also occur, offering fans a half-off discount of reserved or general admission tickets when a church or community bulletin is displayed at the box office. Limit eight tickets per bulletin and only redeemable on the day of game. Game time is 6:35pm and gates open at 5:35pm.

Monday night’s 7:05pm series finale with the Bees will be Dollar Hot Dog Night. Hot dogs will be only $1.00 at concession stands all night long. Gates open at 6:05pm.

The Sounds welcome the Tacoma Rainiers to Music City for Tuesday’s 7:05pm series opener. It will be Tornados Tuesday 2-For-1 Tickets, where fans can bring a receipt with proof of Tornado snack food purchase to the Sounds box office and receive two tickets for the price of one. Gates open at 6:05pm.

Also occurring is Music Industry Wednesday, geared towards the industry that gives Nashville its most well-known nickname, “Music City.” Music industry professionals can purchase a Buy One, Get One Free reserved ticket by presenting a lam, business card, CD, press kit, or pay stub. An exclusive Happy Hour special of $2.00 12oz. domestic drafts from 6:05pm – 7:05pm will be available by the Sounds Stage near the main entrance while Jillian Jacqueline and Lewis Brice perform a pregame concert. Gates open at 6:05pm.

The Sounds will celebrate the legacy of rock legend Elvis Presley on Taco Bell Throwback Thursday for Elvis Night. Any fan named Elvis or Priscilla will receive free admission with a valid ID while all fans are encouraged to dress as Elvis or in Elvis attire to be eligible to win prizes throughout the evening. Come to the ballpark early, as the first 500 fans will receive a fan, courtesy of Sun records. An Elvis impersonator kicks off the special evening with special performance on the plaza stage near the first-base entrance when gates open at 6:05pm. Enjoy Elvis’ favorite snack peanut-butter and banana sandwiches at concession stands for one night only.

Sounds players will be wearing retro 1980s-style uniforms while fans enjoy concession stands filled with discounted pricing, such as $2.00 beer, $2.00 soft drinks, $2.00 hot dogs, $2.00 popcorn, and $2.00 nachos. Beer sales will conclude at the end of the 6th inning, while Slugger’s will sell until the end of game. College students receive one (1) $5.00 General Admission ticket with a college ID and all fans receive one (1) $5.00 General Admission ticket with a valid Taco Bell® receipt. Game time is 7:05pm.

Postgame fireworks will light up the sky as the Sounds conclude their eight-game homestand with a jam-packed Friday evening at Greer Stadium. Musical artist Salvador will perform the final Trevecca Nazarene University FAITH NIGHTS® pregame concert of the season on the plaza stage near the first-base entrance approximately one hour before a 7:05pm first pitch. Gates open a half-hour earlier than normal at 5:35pm.

Also on Friday, the Sounds will be wearing blue and yellow pinstriped jerseys on “Double Plays for Down Syndrome Night” in support of Down Syndrome Association of Middle Tennessee and in partnership with the Pujols Family Foundation. Fans have the opportunity to participate in a silent auction during the game in order to take home a player’s jersey right off his back following the contest. The auction begins when gates open and continues until the end of the fifth inning. All proceeds benefit the Down Syndrome Association of Middle Tennessee.

Individual and group packages are currently on sale. Call 615.690.HITS or visit the Sounds’ website at www.nashvillesounds.com/tickets [3] to order or for more information.