Clarksville, TN – Wesley Kitts made an early statement and Reco Williams later delivered a punctuation mark in Austin Peay State University’s first scrimmage, a rain-delayed event Monday that was moved to late afternoon because of thunderstorms.

The day saw the offense gain the upper hand on the defense, thanks to a strong running game along with sharp passing from senior quarterback Jake Ryan. 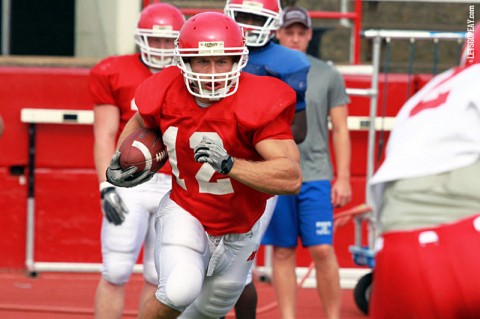 “I really like our depth at running back,” APSU coach Rick Christophel said. “The running backs ran hard.  I think Wes Kitts showed today he can run the football. He is one of the three fastest guys on this football  team. If he can stay healthy, he is primed to have a really good year.

As impressive as Kitts was, Williams may have owned the scrimmage’s most impressive run, a 20-yarder which saw the 6-1, 248 pounder shun several would-be tacklers and even leveling his former Northeast High School teammate J.J. Rutledge, a hit that energized the offensive sideline. Williams finished with 11 carries for 66 yards.

But not to be left out, Pemberton ended with 66 yards on 13 carries, 45 in the scrimmage’s second half while freshman walk-on fullback Filo Langkilde, who has joined fellow Samoans Iosua Siliva and Isaiah Tuisasosopo, had a one-yard TD run.

The running game opened things up for senior quarterback Ryan, who completed 11 of 17 passes for 150 yards, including one TD, a seven-yard fade route to sophomore Darryl Clack in the second half.

“I thought Jake really did a good job today,” Christophel said. “He threw the ball very well and he made good decisions out there—he did not throw into traffic all day long and that is something we have been working on. “

Redshirt freshman quarterback Jacob Sexton finished the day 8-of-18 for 86 yards, including 6-of-12 for 60 yards in the first half.

Senior wide receiver Robert Lemon led the way with four catches for 56 yards while senior tight end Ashlon Adams, who has dropped more than 20 pounds since last season, finished with three catches for 55 yards. Clack had two catches for 17 yards while the usually reliable Devin Stark had just one catch for 15 yards but mishandled a couple other passes.

However, junior defensive end Earnest Smith, a local product, continues his emergence as a defensive force with six tackles, including two for loss, and a pass break up. Senior safety Antwaun Majors added six stops, including one for loss, while forcing one fumble.

“I thought Earnest really showed up today,” Christophel said. “He is going to make a lot of plays.

“We held out our two starting linebackers today in Josh Carroll and Darrick Dilliard, who that hurt us some. We also are a little thin in the secondary as we were without (sophomore safety) Steven Rich and (cornerback) Mookie Clark had some personal things he had to take care of. Once we get those guys back and healthy, I think we are going to be OK.”

The Governors will scrimmage again, 9:30am, Saturday in Governors Stadium.