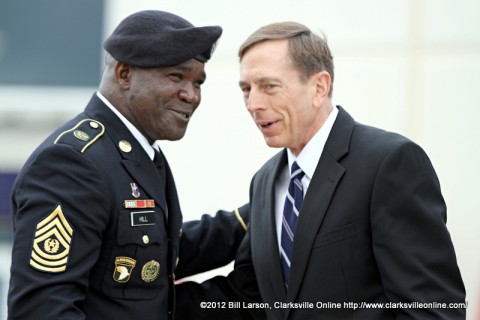 Hill chose Fort Campbell, home of the Screaming Eagles, as the backdrop for his retirement after serving the nation for more than three decades. Hill served as the division command sergeant major under Petraeus as they led the 101st Airborne Division (Air Assault) in to Iraq in 2003. Petraeus would go on to command U.S. Central Command and NATO International Security Assistance Force and U.S. Forces-Afghanistan; Hill would serve as the command sergeant major, or senior non-commissioned officer, in both assignments.

Maj. Gen. McConville called Command Sergeant Major Hill one of the greatest senior non-commissioned officers who ever served in the 101st Airborne Division, and spoke about the honor given to the hundred first Airborne Division of hosting Hills retirement ceremony.

After his remarks McConville turned the podium over to Gen. David H. Petraeus (U.S. Army Ret.)

“Holly and I are absolutely delighted to be here with you all to celebrate the 70th anniversary of this great Division, and most importantly to join you this morning and helping to honor the great Command Sergeant Major, Marvin L Hill and his wife Sharon, and his life of extraordinary service to our nation,” said Director Petraeus in his opening.

Petraeus then pointed out that Command Sergeant Major Hill served 18 years, over half of his 37 years in the U.S. Army Right here at Fort Campbell.

“Indeed up front, I think everyone here will agree that Command Sergeant Major Hill’s  service. Over the past decade. In particular, has earned him a truly distinguished place in our Army’s history. In my view in fact he has been the most valuable player of the All-Star team that is been comprised of our most senior non-commissioned officers combat leaders during that decade.”

He thanked Maj. Gen. McConville, for inviting him to participate in the retirement ceremony and the 101st Airborne Division review that would close out the 2012 Week of the Eagles celebration.

Petraeus recognized the contribution made by the senior non-commissioned officers in the Army, “It is well-known and widely recognized that one of the greatest strengths of Army if not the greatest strength is the core of non-commissioned officers who serve in the Army’s ranks. They have been our standard-bearers, and standard-enforcers. The individual and small unit training experts. The keepers of our traditions and culture. The continuity in our platoons, companies, and battalions.” 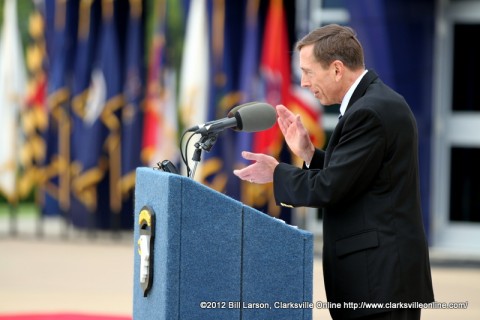 He continued with his praise, “They are in short, the driving force behind all other units do and they truly are as is often observed the backbone of our Army. And I want you to know Sgt. Majors and non-commissioned officers that this for commander deeply appreciates the particularly decisive role played by you. Especially those sergeants major who have been as Sergeant Major Hill has been for the last decade, a Command Sergeant Major.”

To this the crowd broke out into a round of applause.

He then talked about Command Sergeant Major Hill.

“People often asked me whom I military heroes are, and one of the first names that I always offer is that of Command Sergeant Major Marvin L. Hill of Memphis Tennessee. Indeed Sgt. major Hill is the consummate senior non-commissioned officer. The kind of leader who always provides tremendous energy. As you heard here this morning direction, example, and encouragement to our troopers.  And in addition to those impressive qualities he is also known for on equal common sense that is informed by a sincere understanding of, and an abiding concern for our troopers and their families.”

Petraeus spoke of their time together in combat.

“Marvin was as many of you know, my long-time Air Assault buddy. The finest senior non-commissioned officer wing man that any commander could hope for. And in my case that included four combat tours together. Our first two gigs were of course in Iraq, where Sgt. major Hill was the command Sgt. major of what else, the great 101st Airborne Division during the flight to Baghdad in the first year of Operation Iraqi Freedom, during that time he was a rocksteady coach of our NCOs during heavy combat operations, and then demanding stability operations in the rest of that year. He was a doer, not a talker; one who at all times exuded infectious enthusiastic drive, focus, and when required sheer determination. He was above all once again a constant source of energy to everyone around him. He was truly a force multiplier for the screaming Eagles.”

Hill spoke for a few minutes following Patraeus.  You may watch the remarks in full below. 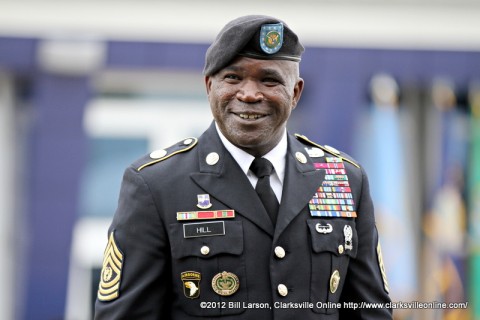 Command Sergeant Major  Hill recently returned from Afghanistan. After having served for 18 months as a Command Senior Enlisted Leader for International Security Assistance Force and the United States Forces-Afghanistan. He was selected for this position of great responsibility by General David H. Petraeus in June of 2010 and assumed his duties and in August 2010 after serving 21 months as the Command Senior Enlisted Leader of United States Central Command.. He was later asked to continue to serve at ISAF and USFor-A on 18 July 2011 by the current commander, United States Marine Corps General John R. Allen.

He has a Bachelors of Science Degree in Liberal Arts and Science from St. Thomas Aquinas College and a Masters of Education in Organizational Leadership from North Central University. He is a member of the Sergeant Audie Murphy Club and has been awarded the Centurion level of the Order of St. Maurice, the Order of St. Barbara, and the Order of St. Michael. Command Sergeant Major Hill is married to Sharon R. (Patton) Hill. They have one son, Curtis, and one grandson Cameron. They both reside in Memphis, Tennessee. 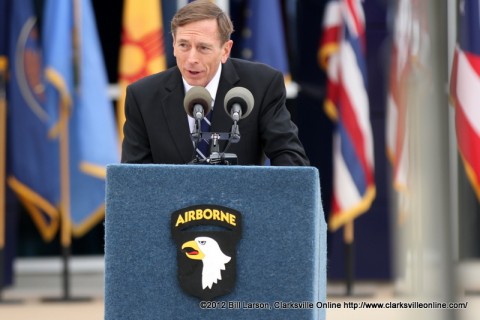 General David H. Petraeus (U.S. Army, retired) became the 20th director of the Central intelligence agency on September 6th, 2011. As director, he leads the agency and also manages human intelligence, covert operations, counterintelligence, liaison with foreign intelligence services, and open source collection programs. On behalf of the intelligence community and the US government.

Director Petraeus has dedicated his life to public service, retired from the United States Army on August 30th, 2011 after this distinguished 37-year career. He last served as Commander, NATO International Security Assistance Force and Commander, US forces-Afghanistan from July 4th until July 18th 2011. His other four-star commands include assignments as the 10th Commander, United States Central Command, and as Commanding General, Multi-National Force-Iraq during the surge.

Prior to those assignments, Director Petraeus commanded the US Army Combined Arms Center and Fort Leavenworth, during which time he oversaw development of the U.S. Army/Marine Corps piece counterinsurgency Field manual; the Multi-National Security Transition Command-Iraq-and, simultaneously, the NATO Training Mission-Iraq, both of which he established; and the 101st Airborne Division (Air Assault)- including while the 101st participated in the fight to Baghdad and subsequent stability operation. During the first year of Operation Iraqi Freedom.

Director Petraeus was commissioned in the infantry . Upon graduation as a “distinguished cadet” from the United States Military Academy in 1974. In addition to the posts Noted above, He Held Leadership Positions the Airborne, Mechanized, and Air Assault Infantry Units in Europe, the United States, and the Middle East. He has also held a number of key staff assignments including Assistant Chief of Staff for Operations of the NATO Stabilization Force in Bosnia, Chief of Staff of XVIII Airborne Corps At Fort Bragg, North Carolina, Executive Assistant to the Chairman of the Joint Chiefs Of Staff, and Chief of Operations of the UN Force in Haiti.

Director Petraeus and one on November 7th, 1952 in Cornwall, New York. He and his wife, Holly live in Virginia, and they have two grown children, a son and a daughter. 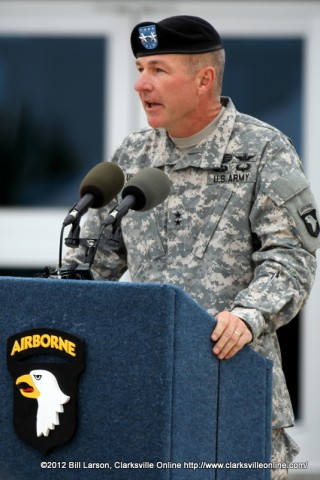 Major General James C McConville of Quincy, Massachusetts graduated from the United States military Academy and was commissioned as an infantry officer in the Regular Army in 1981. He holds a Bachelors of Science Degree from the United States Military Academy, a Master of Science Degree in Aerospace Engineering from Georgia Institute of Technology, and was a 2002 National Security Fellow at Harvard University.

Major General McConville commanded the 4th Brigade, 1st Cavalry in Iraq from 2004-2005. During operation Iraqi freedom and based on the heroism of his aviators and these tireless efforts of the soldiers, his brigade, was selected as 2004 AAAA Aviation Unit of the Year. Major General McConville served as the Deputy Commanding General (Support) for the 101st Airborne Division (Air Assault)/CJTF–101/Regional Command East in Afghanistan during operation enduring freedom from 2008 to 2009.

Major General McConville’s key staff assignments include S-3 for the 5th Squadron, 9th Cavalry, S-3 for the 25th Combat Aviation Brigade, J5 Strategic Planner for the United States Special Operations Command, G-3 for the 101st Airborne Division (Air Assault), Executive Officer to the Vice Chief Of Staff of the Army, and Deputy Chief and Chief of the Office of Legislative Liaison.

Major General McConville, his master Army aviator qualified in the 0H-50 Kiowa Warrior, the AH-64D Longbow Apache, the A H-6, AH-1 cobra, and other aircraft.