Clarksville, TN – The first official day of the 25th Annual Riverfest Celebration kicked off at 5:00pm in several locations throughout downtown Clarksville simultaneously.

At the Customs House Museum the High School Art Exhibition kicked off the Tour d’Art, followed by the Amateur/Professional exhibition at the Smith Trahern Mansion. The Senior Exhibition continues at the Downtown Artists Co-op. 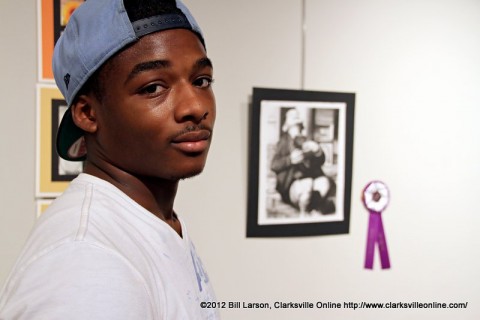 Best of Show for the High School Students Art Show was Kory Polley of the Christian County High School, with his pencil drawing “New Shoes”

Along the Riverfront music began on the various stages including Pride and Joy on the the Budweiser Stage, Morgan McClanahan on the Mary’s Music Stage, Static Calm on the Coup Stage, and Karaoke with Cricket on the River of Culture Stage

The River of Culture Stage in The Kids Zone was a popular destination the Harris Holt Martial Arts Academy’s students gave demonstrations of their martial arts abilities, the Hui Hawaii O Tenesi Hawaiian Civic Club gave a quick Hula Lesson to audience members, they were followed up by Ballet Folklorico Viva Panama’s Carnival Queen Shanida Hatcher demonstrated the Salsa to the crowd. 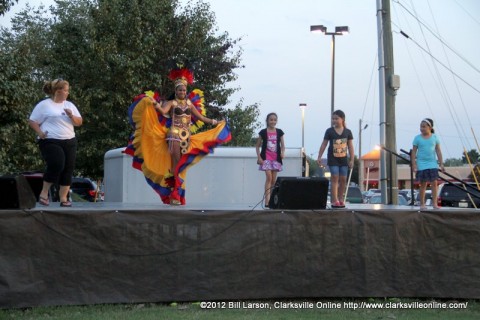 Kids happily dragging their parents from inflatable to inflatable as they enjoyed their part of the festival. Riverview Mounds Century Farm provided their wonderful Petting Zoo, as well ATV towed barrel train that the younger kids could enjoy. On the other side of the Kids Zone the locomotive was running non-stop. Clarksville Family Magazine’s booth was a popular stop for parents with younger children as they could sit down and relax as their kids enjoyed the various activities. Various civic and community groups manned booths on the perimeter of the Kids Zone.

“Where’s the food booth with the Turkey Legs,” someone asked at a Riverfest ticket booth. “Over there,” the volunteer responded as they pointed them in the right direction. The Budweiser booth was also a popular destination. Several of the variety of beers proved so popular it was almost impossible for them to keep them on hand. All your usual fun festival foods were available from the various vendors. 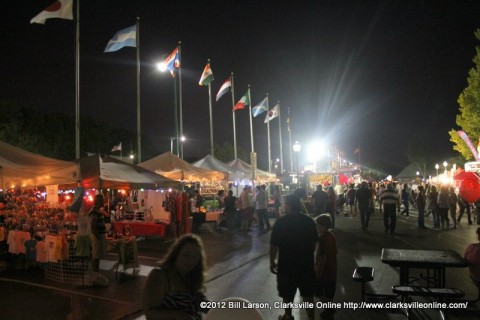 Agero is recognized at the 2012 Riverfest Celebration

The afternoon and early evening was warm and slightly humid but wasn’t as hot as Septembers generally can be, but the night began rain threatened as a line of severe thunderstorms began to move into the area.

Before the Journey Tribute Band Chain Reaction took to the Budweiser Stage to close out the night, lead singer Ryan Christopher decided that the band would limit their performance to the more popular Journey songs in order to get as many of them in as possible in case their performance was cut short. This decision proved wise as in the middle of their performance the stage manager slipped them a note informing them of the decision by festival organizers to institute a 10:00pm shutdown time, an hour early to give people time to get to their cars before the storms were to strike. 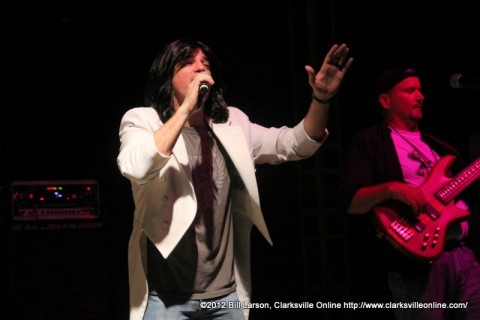 It is impossible to see everything Riverfest has to offer in just one day, but you are in luck the festival continues today [1] at 10:00am at McGregor Park in Clarksville with the Riverfest Regatta, and various dance exhibitions.