Pawleys Island, SC – If Austin Peay State University women’s golf team could have one hole back, it would have been No. 18, Monday, in the second round of the Golfweek Program Challenge, being played on the par-71, 6,121-yard Caledonia Golf Course.

Starting on the back nine, the Lady Govs were battling to remain in the Top 6 until No. 18. APSU played that hole at a combined plus-7. As a result, the Lady Govs find themselves in ninth place at 629 after shooting a 317, Monday. 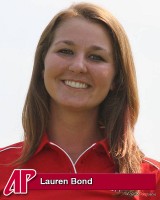 “I am proud of the girls for fighting until the end today,” APSU interim coach Chelsea Harris said. “We started out really well with four of them having birdies on the second hole.

“However, it got rough in the middle but we finished strong.”

Senior Lauren Bond continued to be APSU’s most consistent golfer in the second round, shooting a 78 to go with Sunday’s 76. She is at 154, leaving her in a 17th-place tie.

Freshman Jessica Cathey is just one shot back with her second straight sub-80 round, firing a 79 to go with Sunday’s 76. The 155 leaves her tied for 20th.

Senior Tabitha Beard struggled in the second round with an 82 after Sunday’s 76. She is at 158 after two days.

Junior Rachel Deaton bounced back from Sunday’s 85 to shoot a 78 Monday that included a trio of birdies.

Senior Holly Batey shot 82, Monday, to be sitting at 166 for the tournament.

The Lady Govs were able to play par 3s at just 1-over par, but it was the par 4s, in particular, where they ran into trouble, especially on the green.

“Tomorrow we need to trust and believe that we’re as good as what we are,” Harris said. “The girls are ready to move tomorrow for the final round. We need to stay away from big numbers, mainly 3-putts.”