Back in 2011 astronomers were amazed when NASA’s Kepler spacecraft discovered a planet orbiting a double star system. Such a world, they realized, would have double sunsets and sunrises just like the fictional planet Tatooine in the movie Star Wars. Yet this planet was real.

Now Kepler has discovered a whole system of planets orbiting a double star.

The star system, known as Kepler-47, is located 4,900 light-years from Earth in the constellation Cygnus. Two stars orbit one another at the center of the system: One is similar to the sun in size, but only 84 percent as bright. The second star is smaller, only one-third the size of the sun and less than 1 percent as bright. Kepler found two planets orbiting this mismatched pair.

“The presence of a full-fledged planetary system orbiting Kepler-47 is an amazing discovery,” says Greg Laughlin, professor of Astrophysics and Planetary Science at the University of California in Santa Cruz. “This is going to change the way we think about the formation of planets.”

The inner planet, Kepler-47b, closely circles the pair of stars, completing each orbit in less than 50 days. Astronomers think it is a sweltering world, where the destruction of methane in its super-heated atmosphere might lead to a thick global haze.  Kepler-47b is about three times the size of Earth. 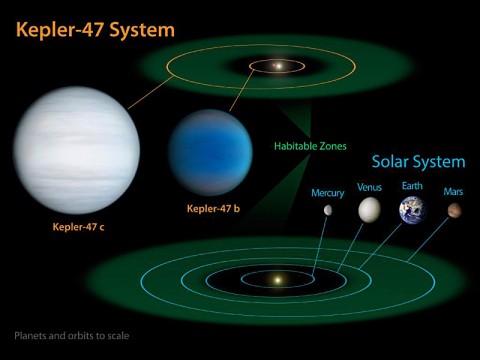 This diagram compares our own solar system to Kepler-47, a double-star system containing two planets, one orbiting in the so-called “habitable zone.” (Credit: NASA/JPL-Caltech/T. Pyle)

The outer planet, Kepler-47c, orbits every 303 days. This puts it in the system’s habitable zone, a band of orbits that are “just right” for liquid water to exist on the surface of a planet. But does this planet even have a surface?  Possibly not.  The astronomers think it is a gas giant slightly larger than Neptune.

The discovery of planets orbiting double stars means that planetary systems are even weirder and more abundant than previously thought.

“Many stars are part of multiple-star systems where two or more stars orbit one another. The question always has been — do they have planets and planetary systems?” says William Borucki, Kepler mission principal investigator at NASA’s Ames Research Center. “This Kepler discovery proves that they do.”

Our own sun is a single, isolated star, with a relatively simple gravitational field that rules the motions of the planets orbiting it.

But, as Borucki points out, not all stars are single. Astronomers estimate that more than half of the stars in the galaxy have companions. There are double, triple and even quadruple star systems. Any planets in such systems would have to navigate a complex gravitational field, tugged in multiple directions by multiple stars. In fact, for many years, astronomers doubted that planets could even form in such an environment.

Kepler-47 erases those doubts—and poses a conundrum: “These planets are very difficult to form using the currently accepted paradigm,” says Laughlin. “I believe that theorists, myself included, will be going back to the drawing board to try to improve our understanding of how planets are assembled in the dusty gaseous disks that surround many young stars.”

The Kepler spacecraft is on a mission to find Earth-like planets that might support life. Says Borucki: “In our search for habitable worlds, we have just found more opportunities for life to exist.”